You aren’t supposed to call it gypsy fighting anymore, though those involved usually still do. Traveller bare-knuckled fighting still takes place all over the world, however. The fights aren’t for titles, they aren’t for money, and they don’t take place with athletic commissions present.

There are rules of “fair play”, however, but more importantly there is pride on the line. The two fighters you are about to watch had nothing but pride on their minds when they went toe-to-toe in truly epic fashion.

There were no crowds present, although a few spectators were nearby to bear witness. It was just two fighters duking it out for the right to be called the better man.

In 2012, the documentary “Gypsy Blood” took a closer look at the tradition of traveling bare-knuckled boxers and fighters Hughie Doherty and Fred Butcher. The film was nominated for several awards. Similiar documentaries have also been popular through the years.

While James had proclaimed he was retired, Ken Shamrock said in 2015 he wanted to fight him and negotiations began. Unfortunately, the bout would never come to pass.

Most bouts of this nature do not end until one fighter admits he’s had enough. Often in this kind of fighting environment, one fighter is able to outlast the other but these two fighters were just too tough.

Bare-knuckled boxers aren’t always the most skilled fighters either, but these two looked to be in-shape and knowledgeable about how to fight. Even when it seemed the guy in the tank-top was taking too much of a beating to continue, he kept coming forward and even turned the tide at times.

The fight ended up continuing on for much longer than these bouts normally do. It even got to the point where the camera operator was worried he didn’t have enough film.

Watch this epic bare-knuckled fight below: 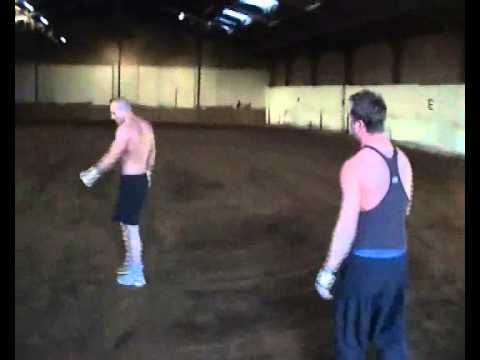 Travellers generally use the rules of “Fair Play” to govern their fights. These rules resemble the traditional Marquess of Queensberry rules first adopted back in 1865, though there are some differences.

While modern-day boxing would eventually incorporate the use of gloves, travelers would not adopt this rule.

Fighters competing under “Rough and Tumble” rules can do whatever they wish. Biting and gouging were two often used techniques in these types of fights. Fighters could fully gauge out their opponent’s eye, leaving them permanently disfigured and blinded.

These fights tended to become less frequent by the time the revolver was invented, however. Most disputes which would have led to “Rough and Tumble” fights were then settled with gun duals.

“Fair Play” fights are still practiced around the world, however. They involve only a gentleman’s agreement to fight fairly.

How to Bet on the UFC: A Beginners Guide for Doing It Right

The Best Boxing Matches to Bet on in 2022

Atilano Diaz - Dec 26, 2016 0
“Defend yourself at all times” is an age-old adage in the sport of boxing. Yet there have been plenty of fighters in the sport’s...