New Footage Has Been Leaked of Conor McGregor’s Recent Arrest in Miami, Florida… Check Out This Bodycam Video Below…

Conor McGregor must love the taste of prison food. The Irishman has been arrested twice in the last two years, sued at least twice that amount of times, and is allegedly being investigated for a sexual assault in Dublin, Ireland and for punching another man in an Irish pub.

The Notorious is a volatile personality and arguably the UFC has lost patience with him. Their new ESPN deal means that they are no longer as reliant on individual star power as they were before, so it’s proving harder for McGregor to drive a hard bargain.

Getting arrested isn’t going to help his case. Check out the lastest clip of the Irishman getting handcuffed and led away by Miami cops, after the whole phone smashing/stealing incident. The actual case looks like it’s going to be settled out of court, but if seeing McGregor looking as helpless as the Khabib fight makes you smile, then here you go. 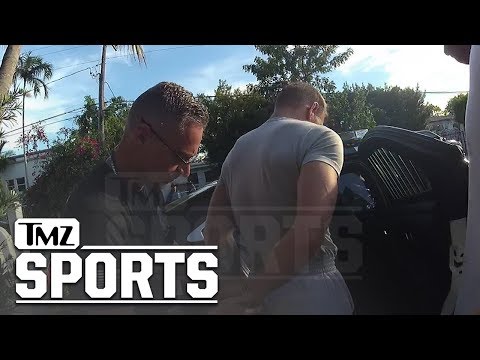 The police bodycam footage shows McGregor getting arrested, handcuffed and placed into a police car after the incident that took place on March 11, outside the Fontainebleau hotel. The Notorious had been out on the town with friends before getting involved in the unfortunate incident.

McGregor’s bodyguard allegedly forced the police to wait for five minutes while the former ‘champ-champ’ got his affairs in order. Frustrated police can be heard complaining about this in the clip.

McGregor’s alleged victim described how he snatched and smashed his phone:

“As soon as he went to shake my hand he pulled me in, grabbed my phone and started smashing it. All of his security guards literally surrounded me, pushed me out of the way. And he’s stomping on it, there’s a video that will be released soon. He was being real rude like, ‘Get the fuck out of my face, you don’t just do that.’ So I was like, ‘Sir can I have my phone back?’”

And there was all of his security and entourage around him. I just kept asking if I can have my phone back. They were like, ‘Move man, move, you better listen to what Conor say.’ McGregor then picked up the phone and put it in his pocket, laughed and then he got in his SUV and they drove off. That’s when the hotel manager came. I got pictures of my son that I didn’t even save to my iCloud, so that’s what p*sses me off the most. Those pictures I am probably not going to ever get again.” 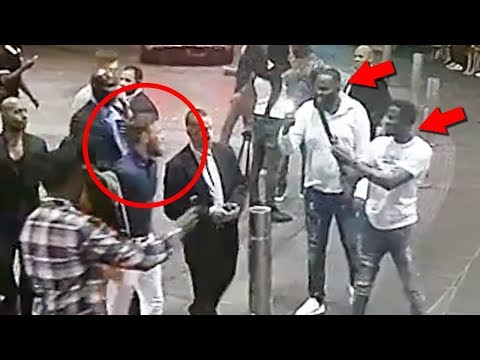 Now in fairness, nobody really believes that this clown is an innocent victim. Should McGregor be going around smashing ‘fans’ phones? No of course not. But it does seem like he was antagonised, as he followed the Notorious and his crew around Liv all night.

You can smell the opportunism.

Gentleman Jeff - Jun 13, 2017 0
Is Ronda Rousey preparing for a return to MMA? Cameras recently captured Ronda Rousey training near her home in Malibu, fuelling speculation that the former...

What Are These Weird Training Methods That Conor McGregor Is Using?