It’s all over and done with now. Conor McGregor has had his day in court and we can all move on with our lives. After pleading guilty to a single count of disorderly conduct, McGregor received his sentence. However, the most crucial thing to take away from all of this is that he will not suffer a criminal record.

This means that he’ll be free to continue his career in the USA and you can expect an announcement in the very near future about his plans. It’s highly likely that he’s going to fight Khabib Nurmagamedov later this year, with Las Vegas the setting.

McGregor made a brief statement to press after proceedings ended. Accompanied by Cian Cowley, who also pleaded guilty, manager Audie Attar, and his personal tailor for some reason, you can watch the footage below.

Statement from Conor McGregor after his guilty plea. pic.twitter.com/WqtJ4gVYmc

McGregor showed rare signs of respect. He acknowledged that the judge had definitely ruled in his favor and showed his appreciation to fans and family who had supported him throughout the months since April.

“I just want to say that I’m thankful to the D.A. and the judge for allowing me to move forward,’ McGregor said. “I want to say to my friends, my family, and my fans – thank you for the support.”

McGregor’s manager Audie Attar revealed that they are happy to move forward and excited on what is going to come next. McGregor is free to resume his career. He told ESPN’s Ariel Helwani:

“Well, we’re going to get back to talking with them (the UFC). We’ve had some communication over the last couple of weeks, and I think those will start to pick up now those are behind us. I think everybody wants to get back to the good old days if you will.

I know Conor’s been training. He’s been getting in shape, he’s in great shape right now. He’s ready to take this next challenge on. When it happens is yet to be know. I think the negotiations have to continue to play out.” 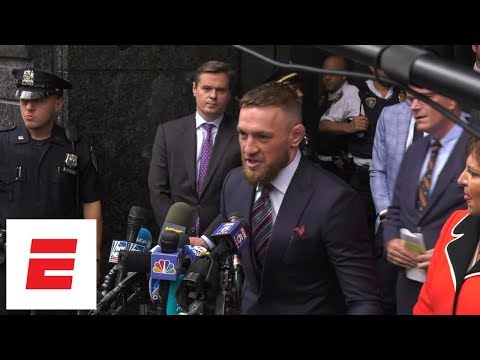 Khabib Nurmagamedov is definitely the No. 1 choice to be McGregor’s next opponent. Attar refused to confirm whether or not it would be in October. It’s also clear that there are tensions between the manager and his client. He said:

Also interestingly McGregor was supposed to seal a deal to fight back in April. That was why he was in New York in the deal. As Attar said: “We’re in the red zone.” McGregor is coming back and that’s all that matters.

Darren - Jun 13, 2018 0
They Say You Should Make Your Impact Felt... Greg Hardy Certainly Did, With a Violent KO Win... Former professional footballer Greg Hardy has become, without...

WATCH: Fighter Fakes Heart Attack… Then Taps Out While Winning