Making history at UFC 205 last night, Conor McGregor did the previously unthinkable. Knocking out Eddie Alvarez to claim the lightweight belt, ‘The Notorious’ became the first ever multi-divisional champ to hold belts at the same time.

For years people had mused and debated the task of holding two titles at once, but few believed it would ever happen. In terms of magnitude, the UFC 205 event as a whole was incredible. Obviously McGregor capped off the night perfectly.

Facing a dangerous and highly experienced champion in Eddie Alvarez, ‘The Notorious’ one made it look so easy. Composed, technical and perfectly timed were McGregor’s strikes. Alvarez stood no chance from the opening bell.

After destroying Alvarez with ease in round 2, Conor McGregor got the microphone from Joe Rogan. His post-fight speech is currently getting near 1 million views through various outlets, and with good reason.

You can watch it here, with the Youtube player below: 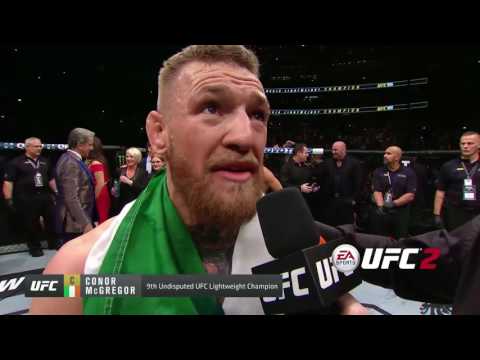 Classic Conor McGregor right there. Now he’s won the UFC lightweight belt along with the featherweight title, many fans are asking who’s next? There’s a host of great fights on the horizon for McGregor, that one is for sure.

The Official UFC 196 McGregor vs. dos Anjos Promo Video Is...