Khabib Nurmagamedov v Justin Gaethje is official after both men successfully made weight in Abu Dhabi. They will fight for the undisputed lightweight title at UFC 254 in the main event. It’s the most exciting fight of the year and one that could go either way. However, a controversy has erupted.

In short, it came about during the weigh-ins. Khabib was the first fighter to step onto the scales and made the championship weight. But it was noticeable how relieved his expression was. This suggested a tough weight cut – something that he has experienced in the past. However, now questions are surrounding the weigh-in process.

Fans, fighters, and media are accusing UFC officials of faking the weigh-in. If you check the footage below, you can clearly see that the balance bar begins to rise above the 155 lb mark, but the official records the weight before it stops moving. This suggests that Khabib – who had to use the towel to make the limit – came in overweight. Do you think it was foul play? 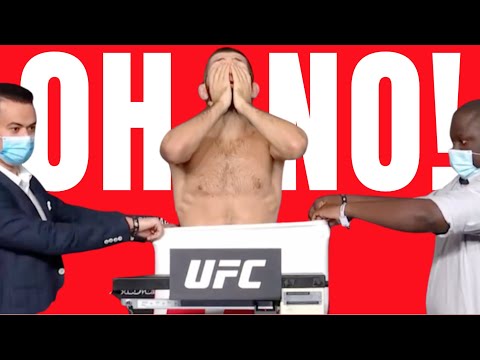 Former TUF veteran and expert nutritionist Mike Dolce gave his take on the situation. He told fans to compare Justin Gaethje’s weigh-in to Khabib’s. He explained that in ‘The Highlight’s’ situation, the weight stabilized before the official recorded the figure. But he didn’t do the same in the champion’s situation.

“Watch Gaethje, watch the difference in how he weighs in Gaethje,” Dolce says. “Watch the scale again, watch how it tips. It hits the top, comes back down, and [the official] pauses and then wipes it. Look at how long it takes him to decide. Comes back down, stabilizes in the middle. He even pauses still and then he wipes it and calls it. Now watch Khabib, here we go, up up up, wipes it on an upward trajectory. He’s heavy here!”

A relieved @TeamKhabib makes weight at 155 pounds for the #UFC254 main event. pic.twitter.com/3YvDpemL1s

Why does this matter? In sum, it has massive ramifications. First of all, Gaethje would have taken home half of Khabib’s purse which in this case is literally millions of dollars. Furthermore, the Russian would have lost his title on the scale and been ineligible to win it back. Finally, it damages the integrity of the competition. As Dolce said:

“Guys, this is incorrect. That is wrong. An error. Let’s call it a human error. Nonetheless, most likely in this moment, Khabib Nurmagomedov was not 155 pounds. He was not scratch weight. Now would he have made the weight? Sure. Let’s say he would. I’m a Khabib fan, I want this fight to happen and I don’t think Gaethje cares at all. But, at the same time, this was wrong. This was wrong, this was an error!”

If you step on the scale after you are over in the back is either for one of two reasons.
1. You have accepted you are going to miss and take consequences.
2. You are stepping on the scale get your 90 min time allotted for extra cut if initially over on official scale.

Let’s be clear, nobody wants this fight to get called off. But at the same time, it casts doubt over the honesty of the UFC. In sum, we can’t be clear if they cheated or not but it definitely stains their image ahead of one of the most important cards of the year.

Only time will tell how Justin Gaethje reacts. Do you think Khabib really made weight?

Darren - May 12, 2019 0
AND NEW... Brazil's Jessica Andrade is the New UFC Strawweight Champion of the World After Sensationally Smashing Rose Namajunas on Her Head...  MMA is a...

The Best Fighting Inspired Games to Play in Online Casinos