It’s been a phenomenal year for Khabib Nurmagamedov. The Russian UFC lightweight champion has defended his title for the first time in 2019, beating Dustin Poirier. He put on a great performance against ‘The Diamond,’ battling through adversity to get the chokehold in.

He has also become an unexpected star in the Arab world. A devout Muslim, Khabib is an inspiration to many followers of Allah across the globe. Now he’s back in his native Russia, where he has been greeted by President Vladimir Putin and citizen from his native Dagestan.

As you might expect, he’s been given a hero’s welcome. Check out the footage below. 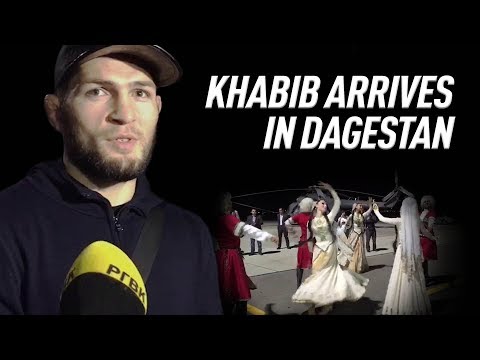 ‘The Eagle’ definitely has a massive fan in Vladimir Putin. The Russian Premier has already hosted both the lightweight champion as well as Conor McGregor, with both men attending the 2018 World Cup. Putin is well known for his love of martial arts and is a black belt judoka himself. He told Khabib:

“You had a convincing victory. I watched the fight, you submitted him with a rear-naked choke, it was a classic chokehold. You did it in the correct way, without squeezing his throat, but holding him on both sides of the neck, as it should be. It was all fair.” 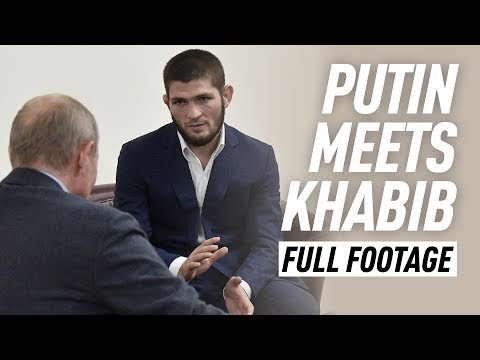 It’s clear that the champion also has a lot of respect for one of the most powerful leaders in the world today. He’s been the honoured guest of Sheikhs and Emirs around the Arab world, but there’s still nothing like going home and being treated like a hero. He told Putin:

“Yes, the opponent was strong and respectable. This time around I fought against a person who respected me.”

After meeting with Putin, Khabib flew back to his native Dagestan. Hundreds of locals were there to greet him in Makhachkala when he landed. A troop of musicians were there to play for him, as well as traditional lezghinka dancers. You can bet that he was feeling the love.

If Khabib successfully completes one more title defence, he will tie BJ Penn’s record of three. There’s usually a high turnover at 155lbs, but nobody looks like beating the Russian right now. However, Khabib’s father Abdulmanap has said that if his son reaches 30-0, he will probably retire. He said:

“Regarding his last fight, then, of course, we would like his final title defence to be in Moscow.”

Of course, you would expect a star as big as Khabib to finish his career on a high. If he can walk away in front of his home fans unbeaten, that would definitely make him happy. There’s obviously still no love lost between Khabib and Conor McGregor. ‘The Notorious’ would love a rematch with the champion, but he needs to win before he can fight Khabib again. It is highly likely that Tony Ferguson will be Khabib’s next opponent, but that remains to be seen.

Salvador Sanchez - Aug 26, 2016 0
Former UFC welterweight champion Georges St-Pierre is suddenly in the news again. After vacating the championship in 2013, many believed 'GSP' would never return....

CONFIRMED! UFC 197 Will Feature RDA vs. Conor McGregor, Holm vs....