‘The Magic Man’ is like a man possessed by some sort of demon. He needs his obsession with Conor McGregor to be exorcised because it’s getting seriously cringe-worthy right now. Malignaggi has recently signed with Bare Knuckle Fighting Championship and a match-up with Artem Lobov looks highly likely.

Lobov is the next best thing to a fight with McGregor because of his close association with the Irishman. At a recent press event, Malignaggi literally slapped the Russian Hammer across the face, prompting McGregor to post a series of photos to Instagram of him schooling the former welterweight champion.

Now Malignaggi has bounced back with footage of McGregor getting clipped in a sparring session with Frans Mlambo, an amateur boxer, in the old UFC gym back in 2015, while preparing for the Chad Mendes fight. McGregor was recovering from an ACL injury at the time. 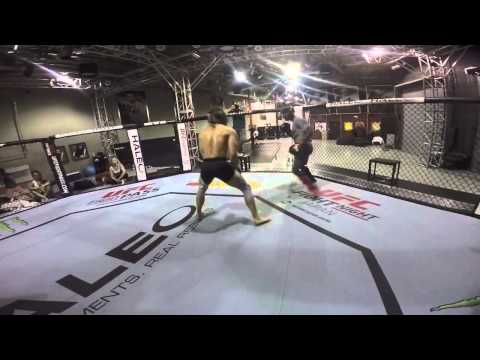 You can judge this for yourself but it doesn’t really look like Malignaggi has much of a case here. First of all the footage was originally posted to Youtube by McGregor’s head coach at SBG Ireland, John Kavanagh. Would he really post a clip of his prize student getting planted on his rear? No way. Malignaggi wrote on Instagram:

“wait for it, wait for it. Knocked down by an amateur ?? and yous wanna believe even outta shape I didn’t smack this guy around ?? #Pinata #noballs@thenotoriousmma.”

The moment he’s talking about takes place at about the 32-second mark in the footage above. McGregor definitely gets tagged and momentarily goes to ground, but it’s more like he’s lost balance than anything else because straight away they touch gloves and get back to it. We’re not McGregor fanboys here, just providing a balanced analysis. Malignaggi is clutching at straws and looking more than a little bit desperate.

Anthony Rumble Johnson holding Paulie Malignaggi with one hand and recording with other lmaoooo pic.twitter.com/NzZ60hPv9M

Even though Artem Lobov is set to fight fellow former UFC fighter Jason Knight this month in Mississipi, it seems that regardless of that result, there will be a clash between McGregor’s sparring partner and Malignaggi. The pair clashed at a press event last weekend. Malignaggi still has hopes of one day fighting the Irishman for real.

“I moreso laugh at Conor,” Malignaggi said. “I’m not really worried about Conor, because Conor is not going to do anything to me. He’s not going to challenge me. There’s fear in his eyes. He’s scared of losing, of being emasculated the way he’s been lately.”

Many fighters have slammed Malignaggi for slapping Lobov and then stepping back. However, ‘The Magic Man’ has countered that with his own explanation.

“To me, the (expletive) slap I gave Lobov is nothing compared to what Conor took from Khabib (Nurmagomedov). The guy made him tap, made him submit to him, and then he spit on him, and he did nothing about it. Yet from the safety of his telephone, he wants to tweet pictures and tweet things at Khabib.”

As we said: he’s obsessed.

Salvador Sanchez - Jul 26, 2017 0
Well, this is an unexpected set of circumstances... Although Jon Jones has fought only once in the last two years, he is still widely regarded...

Does Michael Chandler deserve to fight for the UFC belt?

UFC still has not vacated Khabib as the Champion