UFC 203 was one of the most memorable cards ever. The Cleveland pay-per-view didn’t have the all-star line up for a record breaking show, but it was awesome nonetheless. Following some very strange incidents on fight week, things went off with a bang in Ohio.

Stipe Miocic and Alistair Overeem were the main event for UFC 203, and that was a crazy fight. The heavyweights threw down hard, but it was Miocic who’d emerge victorious after just under five minutes.

The main event was far from the only notable action at UFC 203. In the co-main event we saw a rematch between rivals Fabricio Werdum and Travis Browne. As you’ll see in the video at the bottom of the page, that fight started with a wild flying kick.

The two have never seen eye-to-eye, but the events of their second fight were very extreme. Not only did Travis Browne suffer a broken finger, he also used it to rape Werdum’s eye socket in a gruesome moment.

The brutality of Fabricio Werdum and Travis Browne’s rematch was only really revealed after the fight. We knew something was up with ‘Hapa’s’ finger, but not to the full extent. Undoubtedly the most memorable moment was the opening five seconds though.

Much like he’d done in a few of his pre-UFC fights, ‘Vai Cavalo’ sprinted across the cage and blasted Browne with a flying head kick. It was very similar to the scene in ‘Kickboxer’ when Frank Dux kicked Chong Li.

If you haven’t seen it yet, the UFC has released their ‘Fight Motion’ recap of the event. UFC 203 also featured the debut of former WWE star CM punk. According to figures so far, the UFC 203 card is trending to score huge pay-per-view numbers.

Punk arguably helped bring in a large viewing audience from th pro wrestling world. That said, he got messed up pretty badly. All the fights we’ve spoken about today and a few more on featured in the video below. 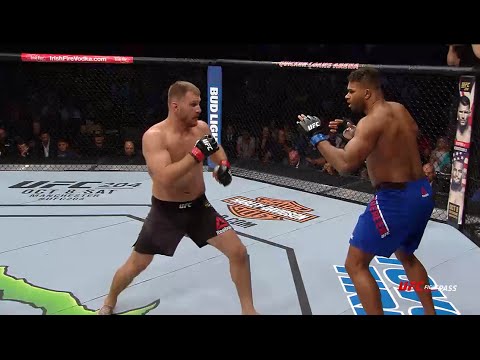