Anyone who thinks that weight classes aren’t necessary should be made to watch this video over and over again. Here’s a question for you? Who is the most technically skilled fighter in the world today? If you’re Joe Rogan you’re definitely going to say, Demetrious Johnson. The man is like a dancer in the octagon.

But if you put him against Daniel Cormier, there’s only going to be one winner. Size matters. Unless you’ve got an incredible skill advantage, the bigger fighter will win in an enclosed space.

If you’ve got no skill at all, and you’re faced with a much bigger opponent – or in this case a freakishly massive McDonald’s worker – then you’re absolutely guaranteed a horrible, humiliating beating. Watch the video below. It’s hilarious/nasty. 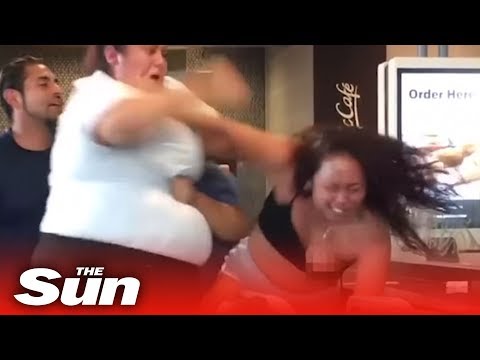 Did you not know that Gabbi Garcia has a new job? Just kidding. The video above shows a massive woman, with hands bigger than my head, who unleashes a brutal pounding on a customer who basically insulted her mother. Now, we don’t like victim-blaming, but if you start giving abuse about someone’s mother, you deserve to get beat. It’s a universal rule.

“Don’t talk about my mama,” says the McDonald’s worker over and over. I think the girl getting battered learns her lesson. She’s smacked around horribly in a video that just screams ‘Murica. We absolutely love it.

At one point the victim even has a horrible clothing malfunction. It’s filtered in the footage folks, but the point is she was exposed for the whole world to see and that’s on the internet forever. If someone started on my mama, that’s the sort of karma I’d like to see.

The McDonald’s crew went full Diaz brothers when a co-worker jumped in and started throwing slaps at the victim again. I don’t know whether to respect the loyalty or cringe at the beating that girl is getting. She picks up a chair to defend herself before getting out of there. No happy meal for her.

Anyway, we fully believe that someone needs to get a petition going to get this woman on Dana White’s Tuesday Night Contender Series. Cris Cyborg really needs an opponent, and she looks like she might eat her alive. The McDonald’s lady might have a bit of trouble getting down to 145, but hey, let’s not worry about the little details.

Speaking of Cris Cyborg, she’s desperate to return against Amanda Nunes this year. Needless to say, the Lioness is terrified of fighting Cyborg. Wouldn’t you be? It’s believed that Nunes is doing her best to bulk up for the fight because she’s noticeably smaller than the hulking figure that is Justino.

It’s believed that this could be Cyborg’s last fight in the UFC. She’s sick and tired of having nobody to fight. She’s interested in exploring boxing and wants a super fight against Cecilia Braekhus before she retires. That could be very interesting.

Atilano Diaz - Sep 10, 2016 0
When you bear the name ‘Gotti’ there’s a certain stigma of violence you are associated with by default. The legendary Italian-American gangster, John Gotti, terrorized...

Five Fighters Who’ve Been KO’d Way Too Many Times

Conor McGregor throws a KICK against Poirier in their faceoff