Everything Conor McGregor does and says makes headlines. The former UFC featherweight and lightweight champion has only fought once in MMA over the past three years but he’s still one of the world’s most financially successful athletes. A major part of that is because of his brief foray into professional boxing against Floyd Mayweather.

He walked away with at least a cool $100 million after that fight and despite losing he has been linked to a potential grudge match against Paulie Malignaggi. But now another name has risen, and it’s all McGregor’s own fault. WBA Junior Welterweight Champion Regis Prograis wants a piece of ‘The Notorious.’

Now there are seemingly infinite champions out there in the boxing world right now, so if you don’t know Prograis’s name it’s ok. However, there are two major things to take away from this. The first is that he’s represented by Mark Wahlberg. And the second is that he’s a legit prospect in the boxing world and has Brazilian Jiu-Jitsu experience. Watch his callout below.

Conor McGregor randomly called out Mark Wahlberg for a fight. Why? No one knows. Regis Prograis happens to be managed by the Hollywood star and he has a message for the UFC fighter pic.twitter.com/CbMCvXAgeC

Now this all came about after Conor McGregor bizarrely called out Mark Wahlberg on Twitter following Justin Bieber’s equally strange challenge to Tom Cruise. Looking back, it’s been a very weird week. McGregor feels affronted by Wahlberg’s broken promise to sell him some of his UFC shares. McGregor wrote:

“I’ve decided to challenge Hollywood actress Mark Wahlberg next. A fight for all the shares! I’ll smack him and his 4 brothers around. It wouldn’t be the first crew of brothers I’ve smacked around. Check the history books. The UFC history books.”

Now we’ve no idea whether or not he was being serious, or had just enjoyed a few shots of his whiskey, but anyway he attracted the attention of the media and his fellow fighters. Nick Diaz, in particular, had a harsh reaction to the Irishman, but now one of Wahlberg’s own stable of boxers has come out and challenged the Irishman. 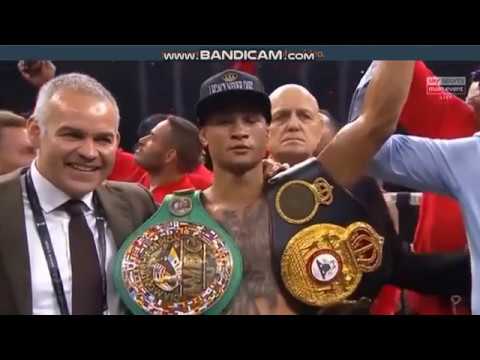 The 30-year-old New Orleans native Regis Prograis is one of the most exciting young boxers on the planet right now. He’s currently on an unbeaten professional winning streak of 26-0, with 20 knockouts during that run. The young man is legit and is booked to fight IBF Champion Josh Taylor for a unification fight. He called out McGregor:

“So look, I’m hearing that Conor McGregor is trying to fight my manager Mark Wahlberg. Look here, don’t call on no actors, dawg. Call out a real fighter. We’ll do a two-fight deal. I’ll fight you in the ring first, I’m definitely gonna whoop your ass. Then I’m going to fight you in the Octagon and whoop your ass in there. Don’t call out actors dawg, call out a real world champion. I’mma hurt your ass.”

Now before you dismiss this out of hand, Prograis has karate experience and still actively trains in Brazilian Jiu-Jitsu. His wife hails from the South American nation and he recently met with a former McGregor opponent in Jose Aldo at a recent Shooto event. If ever a boxer was ready to make the step across to the cage, it is Prograis.

While it’s still unlikely, you can bet that McGregor would definitely be sorely tempted by the idea of being a unified belt holder. If Prograis beats Taylor could he be tempted to step into a ring with him and return the favour in boxing? 140 is more than likely way too light for the Irishman, who used to weigh-in looking like a meth addict during his featherweight days.

It’s fun to imagine though.

Gilbert Burns and Leon Edwards go on a TWITTER War

John - Aug 10, 2021 0
Two top 5 UFC welterweights go at it on Twitter, namely Gilbert Burns and Leon Edwards. Both fighters have yet to face each other,...

Does Michael Chandler deserve to fight for the UFC belt?