Michel Pereira, We Salute You… The Brazilian Fighter is Absolutely Crazy But You’ve Got to Love His Creativity in the Cage… Watch as He Moonsaults Off the Cage at ROAD FC in Seoul…

Road FC is the gift that keeps on giving. The South Korean MMA promotion is doing its best to serve up moments of insanity and ludicrous match-ups, which you simply just have to love. Their most recent event took place in Seoul, South Korea and served up one of the craziest moves you’ll ever see.

Michel Pereira is becoming well-known for his ludicrous acrobatic attempts in the cage. The Brazilian fighter hails from Rio De Janeiro and has a record of 21 wins and 9 losses, at just 25 years old. While his fighting style might not be the most effective, it’s way more entertaining than watching wrestlers lie on each other.

Watch as he literally tried to moonsault onto his South Korean opponent Won Jun Choi. We don’t care why he thought this was a good idea. Just enjoy the moment.

Michel Pereira is a nutcase, and we should love him for it. #ROADFC052 pic.twitter.com/HMc89WmRgn

In chaotic scenes at ROAD 52 in Seoul, Pereira dropped Choi with a spinning kick and then decided to follow up with a moonsault off the cage, WWE style. While it ultimately didn’t work, it was still fabulously entertaining to watch and we think the UFC should sign him so that we can at least see him get knocked out trying this against an elite fighter.

Pereira would go on to win by KO with a punch in the first round. This result gets him back on track after losing by TKO in his last fight on the Serbian regional scene and dropping a No-Contest in his previous match-up before that. Hopefully, he can gain some momentum and keep providing these moments. 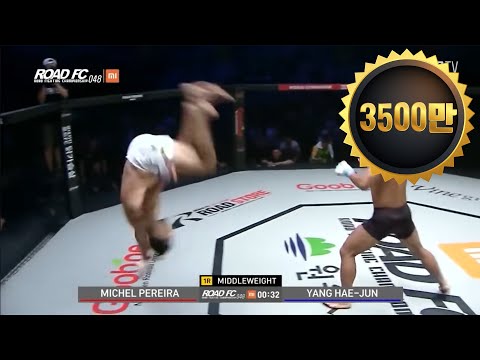 It’s not the first time he’s done something crazy like this either. Back in July of 2018, he first made headlines for an even more acrobatic performance. He jumped off the cage with a punch, did a standing backflip kick, Ali shuffled, and front roll kicked for good measure in a truly unique battle with Hae Jun Yang at ROAD FC 48.

There is clearly something about fighting Koreans that set him off on this wild path. The performance above wore down Yang, allowing him to win by TKO with knees and punches in the third round of their fight.

This wasn’t even the best moment from ROAD 52. Nope, that honour goes to Mansour Barnaoui, who demolished Shamil Zavurov by flying knee KO, on the way to winning the promotion’s lightweight tournament. Incidentally, Zavurov is Khabib Nurmagamedov’s second cousin and had the UFC lightweight champion in his corner on the night.

Barnaoui won $200,000 on the night as the tournament champion. He’s now set to fight for $1 million against ROAD FC lightweight champion Kwon A-Sol. Now that, Ladies and Gentlemen, is how you run a tournament. These South Koreans could teach Bellator a few lessons…

Who knows what chaos ROAD FC has in store for us in the near future?

How Much Money Did Conor McGregor Make Earlier In His Career?

Five UFC Fighters Who Could’ve Been Champions If They Didn’t Fail...