The UFC press cons. Probably even more exciting than the fights themselves. Every time the organization holds a media event like this, things tend to go a little haywire. The best part is, when things start to go south, the UFC just lets the fighters take over.

Case in point: the UFC recently held their Summer Kickoff Campaign in Dallas, Texas last Saturday. And things got heated between more than a couple of fighters. Light heavyweights Jon Jones and Daniel Cormier got into it, as expected. So did Amanda Nunes and Valentina Shevchenko.

But perhaps the most entertaining bit came between #12 ranked lightweight Kevin Lee and #7 ranked Michael Chiesa. The pair are scheduled for a three-round lightweight brawl at UFC Fight Night 112 in Oklahoma City this June. Speaking in front of a slew of media, the two began slinging lots of mud at each other and did not hold back.

“He’s a tough kid, yeah. But you know he’s gonna get beat up so it’ll be fun,” said Chiesa.

“I ain’t even here to shit talk, you know. They over there shit talking. [Michael] Johnson talks about how he’s going to kill somebody. He’s got 30 fights and lost half of them, ain’t killed a m*therf*cker yet. You know, I like Mike. I like Chiesa, he’s a good guy! I’m doing him a favor you know, I’m gonna change his life on June 25th,” said Lee.

“His whole life, they been talking about how hard work and dedication will get him where he wants. And it’s just not true. It’s not gonna happen, it don’t matter how many weeks he gets to prepare. He stands no chance, I actually give him respect for taking a fight that he knows he’s not going to win,” said Lee.

As everyone could see at the media scrum, the two fighters just continued to go back-and-forth and it was pretty fun to watch. However, things took a turn for the worst when Lee made a comment about Chiesa’s mother and Chiesa just lost it. 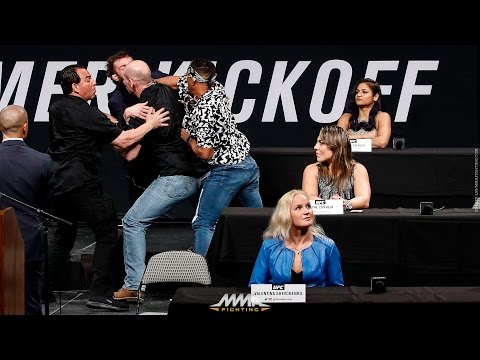 Check out the footage of the press conference here

Chiesa then immediately dropped the mic, got up and ran towards Lee looking to start something. Lee of course obliged, and the two almost collided before a couple of guys got between them to break things up. Lee got to sneak in a right hand that barely grazed Chiesa.

Luckily, things didn’t completely get out of hand and the fighters were escorted off the stage.

“He’s a tough kid, yeah. But you know he’s gonna get beat up so it’ll be fun,” said Chiesa.

Looks like UFC Fight Night is going to be crazy just with these two fighters on the card. Hopefully everything is as exciting as the press conference.

Salvador Sanchez - Oct 16, 2016 0
The UFC welterweight division has not been the same since Georges St-Pierre left. After a highly controversial decision win over Johny Hendricks at UFC...

UFC has parted ways with “The Soldier of God”

Floyd Mayweather Calls Out Conor McGregor For Racism, Then Calls Him...