It’s an interesting time to be a member of the Diaz family. Nate has just become a father but has been involved in two well-documented public brawls over the last couple of months, at separate martial arts events. It’s strange that a man paid to fight is willing to do it for free and risk arrest.

Meanwhile, older brother Nick’s life is even more complicated. He’s currently dealing with the unpleasant situation of being up in court on domestic abuse charges. Not a good look for your image at all – guilty or not guilty. The UFC fan-favorite is currently out on bail.

Now, Diaz has finally addressed his legal problems and given fans an indication of when he expects to return to the octagon. In an interview with TMZ, he opened up about his future and where he sees himself in a year’s time. 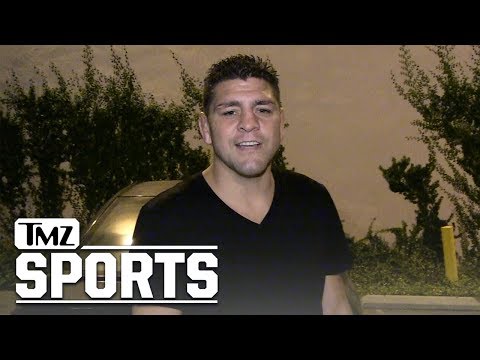 The comeback is on. Diaz hasn’t fought in the octagon since 2015 when he took on Anderson Silva in what turned out to be a farcical event. Although Silva took the win on the night, the result was overturned after the ‘Spider’ tested positive for two performance-enhancing drugs. Meanwhile, Diaz was hit with a 5-year ban after marijuana was found in his system.

That ban was reduced to 2 years on appeal, and he’s basically free to return at any point now. Rumors have come and gone about potential match-ups. A fight against Michael Bisping had momentum, but the British former champion has just gone and retired, so you can count that out. Diaz told TMZ:

“I will be fighting next year for sure. I’ll fight anybody anywhere, next year.”

That’s exciting news. Even more interesting is that he’s willing to consider a rematch with former welterweight and middleweight champion Georges St. Pierre, whose team he accused of spiking his IVF during his weight cut at UFC Montreal back in 2013. When asked if he’d fight St. Pierre, he said:

“Yup! I’ll fight him. He already said he’ll fight again. I’ll win if he doesn’t cheat. If he don’t miss weight like last time and if it was a fair fight.”

The problem for Diaz is that while he’s definitely still got drawing power, he’s unlikely to be of any interest to GSP, whose main focus is on trying to get down to fight for the lightweight title. If he can’t do that, it’s unlikely we’ll see ‘Rush’ rushing back anytime soon. GSP does what he wants. He’s earned that.

Don’t underestimate the legal problems that Diaz must overcome before he can step back in the octagon. He’s facing very serious charges that carry jail time. He’s accused of multiple counts of domestic battery. The alleged victim had red marks and bruises on her neck and body and accused of him of being on a cocaine binge.

He’s currently released on bail of $15,000. When asked about the charges by the TMZ reporter, he said he was “framed” before walking away. It’s a messy scenario. Let’s hope the truth emerges and that justice is served either way. We want Diaz back soon.

John - Jan 10, 2021 0
Matchmaking top contenders in boxing more complicated than making it in the UFC. Why? Because in the UFC, they only consist of one promoter...

Georges St-Pierre Will Come Back for Khabib Fight