The worlds of boxing and mixed martial arts seem to be on a collision course once again. Late in 2015, UFC hot-shot Conor McGregor got his hands on the featherweight title. Knocking out Jose Aldo in a 13-second rampage, ‘The Notorious’ became a global superstar.

Since that time McGregor has been on a warpath. He’s gone 2-1 in the UFC octagon, most recently winning the lightweight title. Ever since he got that 145-pound strap though, talk about a boxing match with Floyd Mayweather has been rife.

After destroying Eddie Alvarez in two rounds at UFC 205, talk of a boxing superfight with Mayweather emerged again. McGregor’s crossover to the squared circle had gone quiet for a while.

Seemingly reignited by his historic win in New York, McGregor got his California boxing license this week. Rumours are being shot down because of his contract with the UFC, but even Dana White acknowledged anything can happen.

During a rather odd rant outside a nightclub, TMZ Sports captured boxing legend Oscar De La Hoya on a night out. ‘Golden Boy’ had clearly been hitting a few beers in the club, and the conversation quickly turned to McGregor.

Rather than talking about Mayweather, De La Hoya insisted his student Saul ‘Canelo’ Alvarez would manage McGregor in the ring. On top of that, he extended an invitation to the Irish star to attend an upcoming boxing match:

“They call him Canelo Alvarez, and he looks Irish just like Conor (McGregor). Think about it, if they step inside the ring, people will think there are two Irish going in the ring. But guess what? Canelo is Mexican and Conor is Irish.”

“If Conor got his boxing license, which I heard, I’m extending an invitation to Conor. On December 7, Bernard Hopkins is fighting on HBO at the forum, live on HBO. I’m extending an invitation to Conor to witness a real legend in the ring. If he wants to witness a real live legend, then go see Bernard Hopkins December 7 at the forum.” 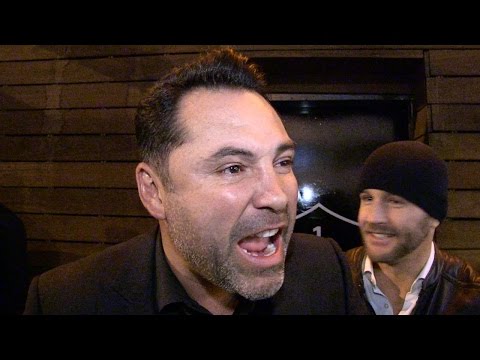