The UFC returned to Brazil last night with an eventful night of fights. Following five straight weekends of MMA action, it was UFC Fight Night 95 in Brazil on show. The capital of Brasilia played host to the action, led by fierce local hero Cris Cyborg Justino.

Facing Lina Lansberg in the main event, Cyborg was forced to cut down to 140 pounds for catchweight again. That subject alone has been shrouded in controversy, as apparently Cyborg weighed in at 141.5, but was announced as ‘making weight.’

Cyborg Crushed Lansberg in Round Two

With the UFC still hesitant to make a women’s featherweight division, Cyborg’s performance remains on the outskirts of relevant. All the same, she looked like n absolute beast. Lansberg, a Muay Thai specialist, looked like an amateur in Brasilia.

As embedded in the following video on Reddit (not our content) Cris Cyborg gets the TKO against Lina Lansberg at UFC Fight Night 95:

After a number of exciting fights earlier on the card, heavyweights Roy Nelson and Antonio Bigfoot Silva collided. Both guys have massive power, but the difference is that ‘Big Country’ has an iron chin, and Bigfoot Silva does not.

The result was a harrowing KO in favor of Nelson, but the popular heavyweight may have made some problems for himself after the fight was finished.

Roy Nelson returned to winning ways in Brazil, taking out Antonio Bigfoot Silva in his own backyard. Fans in Brazil were once again silenced as Nelson went to work on the big man’s chin.

As many had predicted, the right hand from Nelson proved to be too much for Silva to handle. What we did not expect was the crazy antics after the fight was finished. Another heavyweight battle, followed by yet another post fight scuffle.

Here’s the knockout itself, courtesy of a third party host from Reddit: 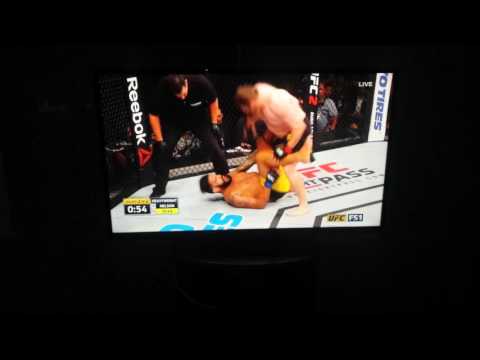 Did the fight go on a couple punches too long? Maybe so, but Roy Nelson felt very strongly about it. It was his reaction after the fight that has caused a bit of a stir. Watch him walk over and kick referee John McCarthy after the fact:

Top Ten UFC Stars With Talents Outside the Octagon

Gentleman Jeff - Sep 3, 2016 0
To be a mixed martial artist successful enough to get to the UFC, it goes without saying that you have to be a little...

Max Holloway could still fight for the belt if he beats...

Paul vs Woodley WEIGH IN, A brawl ERUPTS