It’s Derrick Lewis’s world and we’re just living in it. ‘The Black Beast’ is one of the most popular fighters in the UFC today and for good reason. Put him on a microphone and he’s just one of the most hilarious people you’ll ever listen to.

Lewis defeated Alexander Volkov via a stunning knockout in the most Derrick Lewis performance of his career to date. On the backfoot for the whole fight, he produced a stunning moment of carnage in the last 11 seconds of the fight. It was epic.

Then he produced the immortal line which is destined to adorn thousands of t-shirts throughout the world. When Joe Rogan asked why he took his shorts off in the octagon, to stand resplendent and glistening in his undies, he replied: ‘My balls was hot.’ Now watch the epic remix below.

This is truly incredible and worthy of the great man. Who could not be emotionally moved by the sight of Lewis in his boxer shorts, his hearty belly hanging out, repeatedly saying ‘my balls was hot.’ Let’s hope Reebok get their house in order because ‘The Black Beast deserves so much better than this.

It’s also an excellent reminder of just how phenomenal that knockout was. Lewis had passed out after the first round – no surprise because he only trains for 30 minutes a day – and was being methodically picked apart by Volkov in what was really quite a stale fight. Until the last 11 seconds, that is. ‘Drago’ is still trying to figure out exactly what happened. It’s one of the greatest comebacks in the history of MMA.

Despite openly admitting that the most decorated heavyweight champion in the history of the UFC, Stipe Miocic, deserves the fight more than him, Lewis has accepted a main event title fight at UFC 230 against current champion Daniel Cormier. He’s a massive underdog and had said that he needs to work on his cardio before going anywhere near a title fight.

Now in just over a month, he’ll be back in the octagon. Cormier will represent the biggest test of his career. He’s widely expected to be taken to the ground and absolutely smashed for five rounds, but at the end of the day, you can never rule Lewis out of any fight. Those massive fists can put anybody to sleep. 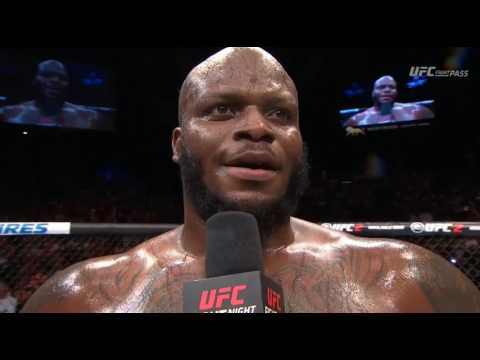 The UFC is taking a massive risk by pushing Cormier to fight Lewis. Yes, he should win convincingly – and that’s no disrespect to Lewis at all. But at the end of the day, we’re talking about heavyweight fighters and it’s the least predictable division in MMA. One punch is all it takes and then suddenly fights against Jon Jones or Brock Lesner are done and dusted.

Still, though, it’s a much better main event than Valentina Shevchenko versus Sacrificial Lamb Sijuara Eubanks. Anyway, whatever happens in Derrick Lewis’s career, he’ll always have his hot balls.

Darren - Sep 21, 2019 0
Colby Covington is seriously annoying the UFC right now... Most fighters dream of making it to the UFC and becoming a champion. It's the pinnacle...

Bisping and Rockhold: From FOES to FRIENDS