Here it is! UFC 194 fight day is finally upon us, and these brand new videos are being watched around the world in the climax of anticipation for Conor McGregor vs. Jose Aldo….

After a crazy year of waiting and debating, UFC 194 fight weekend is finally here. We don’t have to wait much longer before all our questions regarding Conor McGregor and Jose Aldo are answered.

The interim featherweight boss has talked a mean game, but whether he can back it up against the Brazilian legend is another story.

With a UFC 189 media tour in the bag, there wasn’t really much talking left to do, but it still happened anyway. Outside of the trash talking game, there has been some pretty awesome footage to emerge in the last 24 hours. For instance, the intense weigh-ins staredown from the UFC Youtube channel: 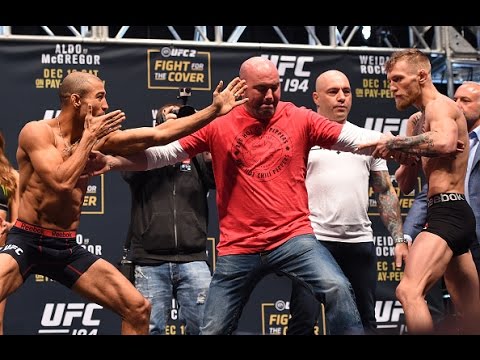 That was rather out of character for both men, as we saw Jose Aldo playing the mind games and taking a wide stance, while Conor McGregor instantly reacted to the Brazilian champion’s aggravation tactics. The shoe is normally on the other foot.

Skip to page 2 to see more amazing hype videos and footage of the main event stars….