Conor McGregor v Donald Cerrone could actually be set to go down. ‘Cowboy’ has confirmed that he is just waiting on ‘The Notorious’ to accept an offer that has been made. It must be noted that McGregor remains suspended by the Nevada State Athletic Commission. That whole UFC 229 brawl situation needs to be resolved before the Irishman can fight again.

Both of these men are fan-favourites, with ‘Cowboy’ well-loved for his all-action performances and the frequency with which he fights. He has the most wins in UFC history and the highest number of finishes. Both records were achieved after he defeated Mike Perry last week in Denver.

Meanwhile, McGregor will be hoping to rebound with a victory after losing badly to Khabib Nurmagamedov after a lengthy lay-off. ‘Cowboy’ could be just the right opponent in terms of name-recognition and as a stylistic match-up to make this appealing to ‘The Notorious.’

This is a potential match-up that fans are genuinely enthusiastic about. It’s fresh and exciting, with the likelihood of a finish very high. Cerrone teased it after beating Mike Perry, refusing to give a name, but saying that he was going to be moving back down to lightweight, with a big name ready and waiting. Now he’s confirmed that name is McGregor, posting the above image on Instagram and Twitter, with the caption:

That suggests that a contract has already been offered to McGregor. The Irishman’s head coach John Kavanagh said that it’s unlikely he’ll fight again until next year, but that’s only a couple of months away. It’s unlikely the UFC would risk negotiating with a suspended fighter, but McGregor is a special case, so who knows? 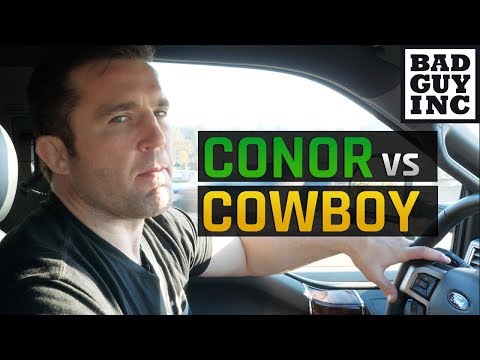 Chael Sonnen believes that this fight is actually very possible. Unless McGregor takes on Nate Diaz or Khabib Nurmagamedov in a rematch, there aren’t really a lot of good options for ‘The Notorious.’ A clash with Cowboy would make sense because he’s marketable, they’ve got bad blood, and McGregor would be confident of winning. Sonnen said:

“The point is this: that fight sells, that fight works. That’s the kind of fight I think stylistically Conor is going to look at and say, ‘yeah I would take that.’ For sure Cowboy’s going to look at it and take that. I think if you’re looking at the Conor McGregor sweepstakes, that is constantly going on – and yeah he’s suspended right now and he’s gotta get through Nevada – but I do not believe there is an immediate path to Khabib Nurmagamedov.

As stylistic match-ups go, this would be very interesting. McGregor fancies himself against any striker in the UFC. While Cerrone is predominantly a kickboxer, he’s also got an excellent ground game. On the feet, McGregor has the advantage, because he’s way more dynamic and slicker than ‘Cowboy’, who has lost 11 times in 46 professional fights, and never won a title.

However, Cerrone is taller than McGregor – and we saw how ‘The Notorious’ struggled to adapt to the physical demands of fighting Nate Diaz. Both men will see this as potentially winnable. Most importantly, it’s a chance for a ‘red-panty night’ for ‘Cowboy.’ No fighter on the UFC roster deserves it more.

Darren - Jul 13, 2018 0
Brendan Schaub and Dana White's Beef Continued Yesterday... And a Bizarrely Interesting Detail Has Emerged...  If you were following the world of MMA yesterday you...