There’s something about absolute chaos that combat sports fans love. There’s a reason, after all, why bare-knuckle boxing has recently become popular again. It could be a freakshow match-up between two super-heavyweights, or a genuine grudge. Fight fans love a little bit of carnage, with guaranteed blood, thunder, and a bit of stupidity thrown in.

Enter the URCC. The Filipino MMA promotion is the biggest operating out of the South-East Asian nation. It was founded back in 2002 and is also self-styling itself as the biggest in Asia (clearly not true because ONE obviously is.) They’ve produced some top fighters including former ONE champions Kevin Belingon and Eduard Folayang.

Now they’ve given us something completely different with 3-on-3 MMA fights. Yep, that’s right. Team MMA has now come to Asia. Check out the madness below.

As you can see from the footage above, there were scenes of absolute chaos in Manila, where this wacky fight went down. 6 fighters entered the octagon with 3 referees, all set to throw down and batter each other into oblivion. We’ve no idea what weight these guys are – one of them is clearly carrying a bit of extra timber – but who cares?

The six men touch gloves and then the fight starts. With so many people in an octagon, it quickly becomes a claustrophobic environment. In these tag team battles, the fighters have to make the vital decision whether or not to go one-on-one with each other or to gang up on one guy from the other team.

The problem is, the other team are doing the exact same thing. If one of your guys gets taken down, you can try and sneak up on the attacker and catch him off-guard, but then that could leave you exposed as well. While there is one referee per two fighters, it’s still pretty dangerous and very congested in there.

It’s obvious that the actual quality of the fight is pretty low, but the madness inside the cage does kind of makeup for it. This fight ends in dubious circumstances when one of the fighters takes an illegal shot to the back of the head. Well, if you fill an octagon full with 8 people, then of course accidents are likely to happen. 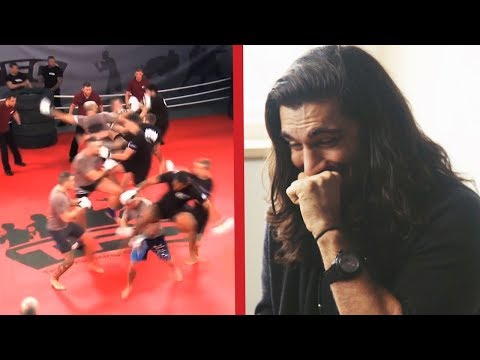 As you might expect, Russia was the first country to host team MMA fights. There have been 5-on-5 matches there, which is just a little bit too mental. At least with 3-on-3, there’s some space left in the cage for the fighters to move around.

It’s highly unlikely that the likes of Bellator or the UFC will ever go down this sort of crazy route. Who would be your dream match-up? Jon Jones, Francis Ngannou, and Khabib Nurmagamedov against Colby Covington, Colby Covington and Colby Covington are ours.

Darren - Nov 8, 2019 0
Daniel Cormier is one of the greatest fighters of all time. So he's well able to spot another legend. The former UFC light-heavyweight and...

Tallest Fighter in UFC History Gets SMASHED & Nate Diaz Gets...

VIDEO: Jake Paul stole Mayweather’s hat but got BEAT UP