Recently we’ve seen a lot of mixed martial artists getting in trouble with the law. Perhaps the most high profile of those was former UFC light-heavyweight champion Jon Jones. Following a number of sketchy incidents involving failed drug tests, ‘Bones’ really came a cropper.

Already writing off a Bentley in an expensive car wreck in 2011, Jones was not new to this trend. After a night out on the tiles in 2015 though, the young ABQ native went too far. Crashing in to a woman in the early hours of the morning in a rental car, ‘Bones’ fled the scene.

Forgetting his failed dope screens for Marijuana and estrogen blockers, it seems Jones’ fascination for driving fast gets him in trouble. According to the formerly dominant champion, he’s ow hired a professional driver.

The same can not be said for UFC veteran Henry Martinez. Martinez also lives and trains in New Mexico, and has fought three times for the UFC, all in 2012. He compiled a 1-2 record before being cut by the promotion. Now he’s in some serious trouble.

As you are about to see on the Youtube video below, UFC veteran Henry Martinez stands accused of a dramatic hit-and-run. According to the report, Martinez was pulled over by an armed citizen after the man saw Martinez driving off with a bicycle stuck to the front of his SUV.

Stating he had hit a cyclist a few hundred yards before being pulled over, the armed gentleman states Martinez had attempted to flee the scene of the alleged crime. Take a look at the report by KRQE News on the Youtube video below: 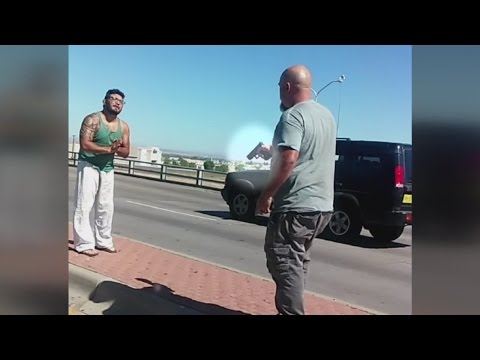 When the video was first released it was not apparent that this was indeed Henry Martinez. In case you don’t remember him, this was probably the highest level fight he took part in.

Mayweather vs. McGregor PPV Price Reduced Massively…But Not in America