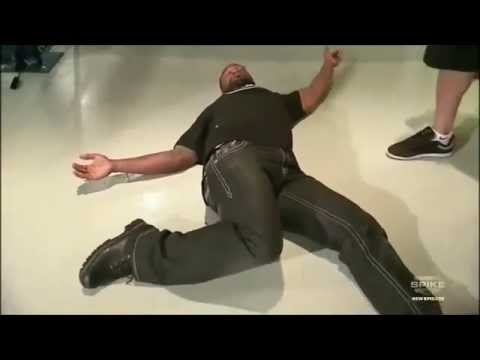 Quinton ‘Rampage’ Jackson and Rashad Evans had a tense, adversarial relationship on the set of The Ultimate Fighter Season 10 that saw them regularly squaring up to each other to engage in a few rounds of verbal sparring.

However, despite the heated exchanges there was also time for some wickedly cruel moments of humor, such as the time they started impersonating each other’s infamous knockout losses.

Evans started it, but ‘Rampage’ won the battle by doing an action replay of Evans unforgettably brutal KO loss to Lyoto Machida, including lying on the floor with his leg twitching, while branding it, “The stanky leg,” – a catchphrase that’s now often used by fans.

Darren - May 5, 2019 0
Kickboxing Legend Raymond Daniels Landed One of the Sickest KOs You Will Ever See... Was This the Best Ever in the History of MMA? Wow....