MMA is an extremely tough sport that can take it’s toll on even the worlds best fighters, but it’s worth remembering that some of these stars also have extensive backgrounds in other combat sports too.

In this article we’ll look back at how some of these stars forays into sports like boxing and kickboxing didn’t always go according to plan and left them suffering nasty knockout losses. 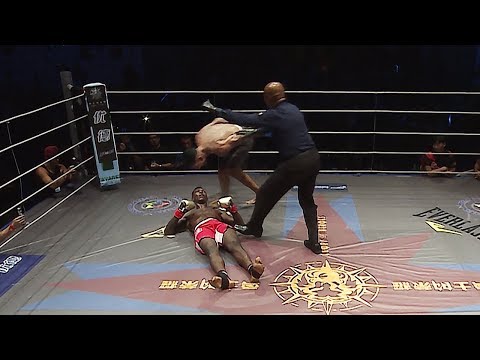 UFC middleweight champion Israel Adesanya has been one of the hottest properties in the sport over the past few years, appearing indestructable during a perfect 19-0 run so far.

However, ‘The Last Stylebender’ also has a vast amount of experience as a kickboxer where he racked up no less than 80 fights and won 75 of them – an impressive resume by anyone standards.

That being said, the final fight of his kickboxing career in 2017 resulted in the one and only knockout loss of his entire career.

Adesanya was fighting Alex Pereira at Glory Of Heroes 7 and it delivered some exciting action in the opening rounds, including ‘Izzy’ rocking his opponent.

As such he started the third round in confident fashion with a flying knee, but later Pereira landed cleanly with a left hand to the jaw that flattened Adesanya on the canvas for a highlight-reel KO finish.

Nevertheless, Adesanya bounced back just a few months later with a TKO victory over Melvin Guillard in an MMA fight and within a year was signed by the UFC.

John - Feb 10, 2021 0
After news of Wilder accusing Breland of spiking the water that led to his loss and even went to drop him as his boxing...

Security precautions in workplaces shouldn’t be anything less than perfect