With a whole host of nominees to choose from for 2015’s biggest scumbag, only a select few will make it to the winner’s table. Those that do, can be considered among the biggest douchebags of all time…

What a year it’s been in mixed martial arts, as we reflect on what was an extremely eventful 2015. Titles changed hands in most of the UFC weight categories, stars were born, and careers dashed on the rocks in the fastest moving sport on the modern market.

Unfortunately scumbags stick to fast moving sports such as MMA like flies to the proverbial manure pile. Indeed all sports have suffered an influx of total tools at one time or another, but combat sports like boxing and high level MMA promotions have a particular attraction douchebags.

As a special end of year piece, we’ve opened the voting to the biggest scumbags of 2015 in MMA, and the results were stunning to say the least.

Without further ado, the nominees for the biggest MMA scumbag of 2015, followed by the big reveal of the winner….

UFC president Dana White does himself very few favors when it comes to his reputation in the MMA community. His bare faced lies and explicit rants have become both a thing of MMA lore, and also at times a weight around the neck of the promotion.

A few quotes from Dana White this year ‘(The Reebok Deal) has been a home run,’ ‘All these people saying Ronda (Rousey) is fighting low level competition, or she is overhyped, they don’t know about Judo,’ ‘Frankie Edgar gets the next title shot,’ ‘These guys saying they are losing $90K per fight on the Reebok deal, they never made that much per fight. These guys aren’t even that popular.’

We could go on, but for posterity here is a video of Dana White acting like a dick: 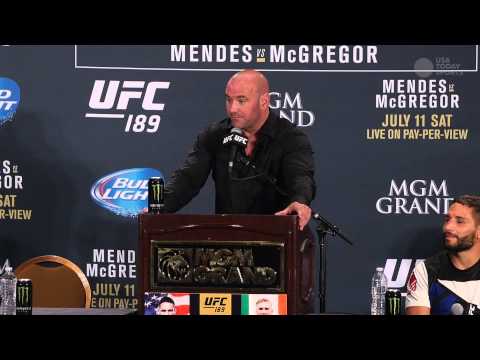 Former UFC light-heavyweight champion was always quite the heel during his reign with the title, but 2015 was truly a douchebag’s coming of age for ‘Bones.’ No longer was it only the realms of MMA that Jones was laying wreck to, he took his wrath of destruction to the streets.

A late night/early morning New Mexico hit-and-run landed Jones in hot water, as he was stripped of the title he’d held with such dominance, banned by the UFC and faced a potential 5 year prison sentence.

His failed drug test for cocaine and subsequent BS one-day stay in rehab was overshadowed by his latest actions, but still not forgotten. He has since been reinstated and could well win his belt back in the rematch with Daniel Cormier next year.

Salvador Sanchez - May 21, 2016 0
Who runs the official UFC website?!? Madness in the world of mixed martial arts is not uncommon, in fact it's one of the main reason...

Conor McGregor Drops $4500 on Free Drinks at His Local Bar