Before Francis Ngannou came along Anthony Johnson was considered the most ferocious knockout puncher on the UFC roster. While he’s most famous for being an elite light-heavyweight contender, ‘Rumble’ has also fought at middleweight and extraordinarily welterweight.

That’s absolutely crazy to imagine now because he’s basically got more muscle right now than TRT Vitor Belfort did in his prime. Johnson jumped into weightlifting after walking away from the UFC but has said that there is one fight that could tempt him back into the octagon.

Mr Jon ‘Bones’ Jones is the name on his lips. Don’t even try to tell me that you wouldn’t tune to watch this go down. With Jones’s future surely in combat sport’s most glamorous division, this would be a match made in heaven for fans.

Johnson hasn’t fought since his title fight loss against Daniel Cormier back in 2017. Still only 34 years old, he’s definitely not too old for a comeback. However, it would have to be at heavyweight, because as you can see from the picture above, ‘Rumble’ is massive.

“The only way I’d come out of retirement is if Jon Jones goes to heavyweight, and then that’s when I’ll come out of retirement and fight Jon,” Johnson said on the “Into the Weeds” podcast. “I mean, that’s the only guy I want to fight. Because after him, I can officially say I did my job, (and) my mission is complete. Although I didn’t win a title, I fought the best of the best.”

Johnson explained how he became demoralized after realizing that the executives were the ones really making the money, while the fighters were putting their bodies on the line. It’s obviously part of the game, but it’s easy to forget that the fighters are often underpaid while the company head-honchos fill their pockets. Johnson explained:

“Being in the cage and fighting – this happened during the fight, I think after I knocked somebody out. I don’t remember who it was. I remember looking at Dana on the other side of the cage and thinking, ‘Damn, I just put in all this work, and I’m getting the victory and feeling like a winner, but the dude on the other side of the cage is celebrating more than me right now, because he’s not taking one punch, he’s not running one mile, not doing one sit-up or push-up, and he’s making a grip of money.’ I was like, yeah, it’s time for a career change.” 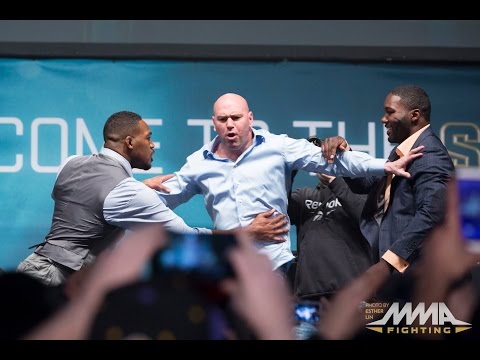 Despite insisting to Joe Rogan that he doesn’t like hurting people, he’s just good at it, Johnson clearly is enough of a competitor to want a shot at arguably the greatest fighter in the history of the sport (asterisk inserted). The pair were previously booked to fight, but the fight was unfortunately pulled after Jones was involved in a hit-and-run incident back in 2015.

With ‘Bones’ future likely to be at heavyweight this fight could be an interesting possibility down the line. Johnson will need to do a record-breaking detox before he steps back into an octagon though…

What is the best way to restring a tennis racquet?

Newly Released Footage of Daniel Cormier After UFC 214 is Hard...