During an unprecedented and chaotic scene at Bellator 187, UFC star Conor McGregor caused massive controversy. It’s not the first time McGregor has caused respected referee Marc Goddard grief, but this time it went too far.

During his teammate Charlie Ward’s fight against John Redmond, the Irish UFC champion decided to go berserk. In the final second of the round, Ward dropped Redmond with a stiff punch.

As Ward moved in for the finish, Goddard went to wave the fight off. Scaling the cage and jumping in to celebrate, McGregor was ordered out by the ref. Here’s where it went downhill rapidly.

McGregor simply lost his head, lunging and screaming at Goddard.’The Notorious’ appeared to shove the downed Redmond, before again turning his attention to Goddard. After shoving the ref, McGregor was swarmed before being escorted out.

It didn’t end there, as the Irishman returned to slap an athletic commission official in the face. 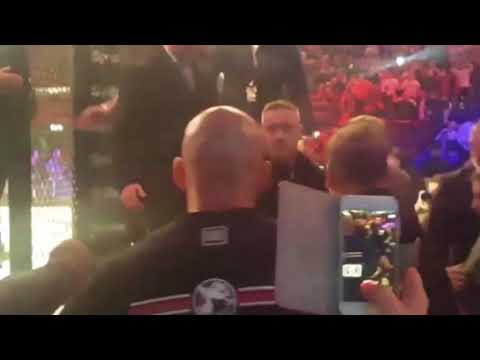 Since the ruckus, there’s been a lot of talk about how the UFC should handle this. Sanctioning Bellator 187 was actually the Mohegan Tribe Department of Athletic Regulation (MTDAR).

Mike Mazzulli, the president of the Association of Boxing Commissions and Combative Sports (ABC) was seriously not impressed by McGregor’s duo of assaults on officials at Bellator 187:

While the Mohegan Tribe Department of Athletic Regulation (MTDAR) was regulating Bellator 187 in Dublin, Ireland, on November 10, 2017, the following events took place during the Ward vs Redmond bout.

Mr. Conor McGregor who was a spectator at the time, disrupted the event by scaling the cage prior to the conclusion of the bout. Mr. McGregor’s conduct jeopardized the health and safety of the bout participants by delaying necessary medical attention to the fighters that were injured during the round.

The MTDAR has been in consultation with the upper management of the UFC regarding Mr. McGregor’s inappropriate and unacceptable behavior.

The MTDAR has also contacted members of the Association of Boxing Commissioners that have licensed Mr. McGregor in their jurisdictions to inform them of Mr. McGregor’s behavior.

In case you were wondering, Bellator 187 actually happened and was a decent event. Here’s the results, minus Conor McGregor’s potential career KO-ing behaviour in Ireland: