Things just got a little bit more complicated for the UFC in their pursuit of Brock Lesnar. The WWE superstar has renewed his contract with the organization. However, Scrapdigest understands that he still has a one-fight option with the UFC. It makes negotiations with Lesnar – as well as selecting an opponent – that bit more difficult.

Lesnar is a former UFC heavyweight champion. With his massive stature and giant knife tattoo down his chest, he was an icon before the likes of Ronda Rousey and Conor McGregor came along. After losing his belt to Cain Velasquez it wasn’t long before he stepped back into the entertainment industry.

The giant American did make a return against Mark Hunt in 2016. He won that bout in controversial circumstances. After testing positive for banned substances the fight, Hunt was not happy and the fight was overturned to a No-Contest. This is an added complication to any future he has with the UFC.

UFC President Dana White will be cursing this one. He was adamant that talks were proceeding well with Lesnar, and that the South Dakota native would be back in the octagon – possibly against the winner of Stipe Miocic vs Daniel Cormier. You can’t get more definite than this:

“Yeah, Brock Lesnar is coming back. I don’t know when, but yes he is.”

Well, it turns out that is not the case. Lesnar will rematch with WrestleMania 34 opponent Roman Reigns in Jeddah, Saudi Arabia. The pair will duke it out at the Greatest Royal Rumble event, in a landmark moment for the Kingdom.

It will be fascinating to see how fans respond to Lesnar’s contract situation. On Sunday night in New Orleans, their response was lukewarm. Lesnar’s fickle nature isn’t doing him any favors. However, one thing is certain: he brings a whole shedload of cash and that’s why the UFC wanted him back.

The greatest reaction of the night came for Ronda Rousey, who made her debut alongside Kurt Angle in a tag team match. They fought against Triple H and Stephanie McMahon in what definitely turned into the people’s main event. It was an extraordinarily successful night for the former UFC bantamweight champion and it is great to see her succeed. 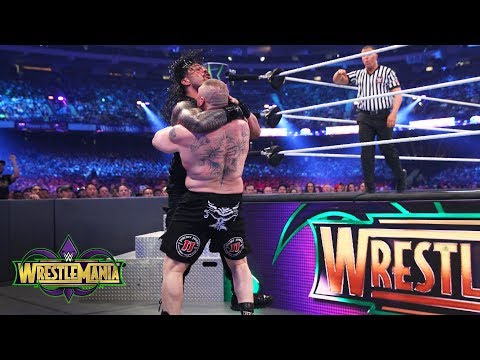 White had signaled that he wanted Lesnar to fight the winner of DC vs Stipe Miocic. However, if Lesnar has only one UFC fight stipulated in his contract, this is a situation that could get messy. Instead, Francis Ngannou could be a more realistic opponent. The giant Cameroonian has been vocal in his pursuit of Lesnar in the past.

Lesnar could be Ngannou’s kryptonite. Although the ‘Predator’ can take your head off with one punch, Lesnar has all the tools and the strength to shut the heavyweight division’s hardest puncher down. It would be a fascinating and exciting fight. A win would get Ngannou’s name out into the mainstream and set him up for a second title fight. It just goes to show that nothing is easy in the world of the UFC.