Remember The Whole Nate Diaz/Conor McGregor Bottle-Throwing Incident? Well, it’s Come Back to Haunt McGregor After He Got Hit By a Lawsuit… But He’s Not Having It…

So much has happened in Conor McGregor’s life that UFC 202 seems forever ago. That was the second time that he fought Nate Diaz. After losing at UFC 196 – in a shock defeat – the Notorious was out for revenge. Needless to say, there was nothing but bad blood between the two men.

One of the most infamous events in the build-up to their fight was the bottle-throwing incident at a press conference. Chaos ensued as the two sides launched bottles and cans across the room at each other, with both men getting massive fines.

Now McGregor has been forced to respond to a lawsuit after William Pegg, a security guard at the event has alleged that one of the cans the Irishman threw caused him injury. You won’t be surprised to learn that McGregor simply is not having it. 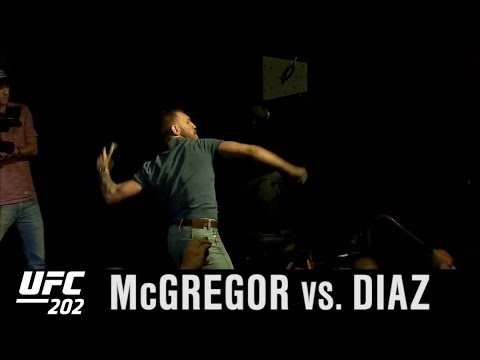 It was one of the most entertaining/ridiculous events in recent pre-fight buildups. It’s also worth mentioning that Nate Diaz started it because that tends to get lost in a lot of retellings. After McGregor showed up incredibly late for media duties, Diaz and his entourage decided to leave.

The Notorious decided to shout some choice words after them. Diaz being Diaz turned around and chucked a bottle at his opponent. Obviously, McGregor had to launch it back and started throwing bottles and cans at the Stockton fighter. Meanwhile Dana White started having a meltdown.

McGregor was served a $25,000 fine and 25 hours of community service for his role in the incident, while Diaz, the instigator, got 50 hours and a $50,000 fine. Both men would have surely expected that this was all in the past.

Not so. McGregor has been stung by a lawsuit after William Pegg, a security guard at the event sued him for throwing a can and injuring his shoulder. The Notorious has responded emphatically to the charge. He issued an official statement:

“Had Pegg met his obligations not only as a security guard on duty during the press conference, but moreover, the person purportedly in charge of security, and protected Conor and his friends and family, then this entire incident would have been avoided.”

Boom. Conor McGregor is not messing around.

It’s going to be very difficult for Pegg to prove that it was McGregor that caused him this alleged injury. While there is obviously footage of the event, it’s not going to be easy to prove anything. Especially when your legal opponent is a millionaire. I think it’s a losing battle.

Meanwhile, McGregor is due back in court today in New York. He’s optimistic that he’ll be able to reach a plea agreement with the Brooklyn magistrate. He also tweeted and deleted this morning: “Calgary, Canada.” That might seem random, but it’s really not. Are you ready to get excited?

Khabib Nurmagamedov is currently in Calgary, Canada. Can you see what’s happening here? Expect rapid movement as soon as this court case is done.

Atilano Diaz - Aug 27, 2017 0
Following the conclusion of the blockbuster Floyd Mayweather vs Conor McGregor superfight, many fans want to hear from McGregor to understand what he went...