Conor McGregor is not impressed by Gennady Golovkin or Canelo Alvarez…

With 11 days to go until Mayweather vs. McGregor, the hype continues on a daily basis. There is, however, another big boxing match drawing closer, one that many feel is far more legitimate.

On September 16 two of the best boxers alive will compete for all the marbles. Gennady Golovkin and Canelo Alvarez square off in the very same T-Mobile Arena in Vegas that hosts MayMac.

The scheduling conflict led to the promoter and former world champion Oscar De La Hoya basically condemning Mayweather vs. McGregor. Turns out ‘The Notorious’ isn’t too keen on Canelo vs. GGG…

“Golovkin is Out of Shape & Canelo is Stuck”

As quoted by BloodyElbow.com, the sharp-tongued Irishman does not think much of the two biggest talents in boxing right now:

“I’m not really too much of a fan of either of those,” McGregor said. “I think Canelo’s a little but stuck, a little bit flat on his feet. When I watch footage of him I just see him getting peppered — he has no feet under him.

“Golovkin I think came into camp, for this preparation, badly out of shape. I’m looking at him badly out of shape up in Big Bear and I just see a drained individual. So, although they’re supposedly up there as well, I don’t really think they are.” 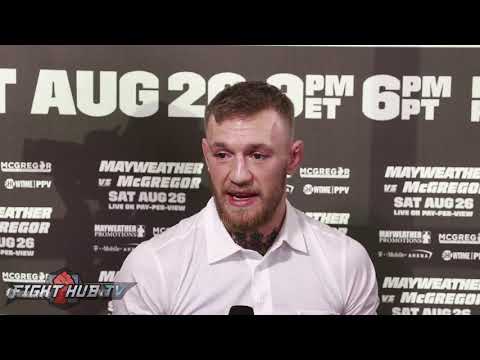 With McGregor planning on competing in boxing and MMA at the same time, questions are raised about the timeline of his first title defense at lightweight. Since defeating Eddie Alvarez at UFC 205, McGregor has been inactive in MMA.

There’s a growing opinion among some fans on the web that McGregor is going to shock the boxing world. Could we truly be witnessing the evolution of combat sports as a whole, or are we simply being sold ‘wolf tickets’ as Nick Diaz would say?

As far as his comments on Golovkin and Alvarez, McGregor’s performance against Mayweather will prove whether or not they hold weight. Opposite to the opinion McGregor could win is an overwhelming voice saying he’s going to get steamrolled.

Which side of the fence do you sit on?

John - Jun 20, 2021 0
Most MMA fans would be delighted to hear that the UFC legend, Anderson "The Spider" Silva just beat the son of All-time Mexican great,...

Khabib Reveals Exactly What He Told Dana White After UFC 219