Conor McGregor throws a KICK against Poirier in their faceoff

The pre-fight press conference for UFC 264 just finished, we expected a trash talking Conor McGregor and we got it. Right off the bat, the way he walked or made his entrance it was the old cocky McGregor that we were entertained in seeing. Full video can be watched below. 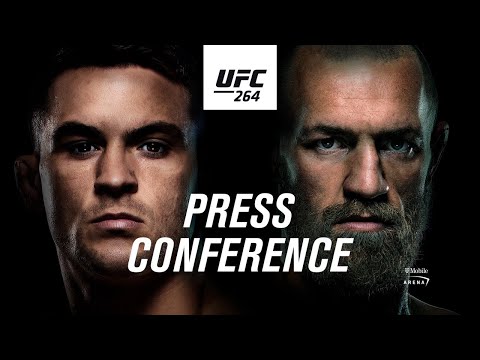 A lot of media and fans were in attendance and it was a McGregor favored crowd. Despite coming off a brutal knockout loss, fans are still loyal to McGregor. There were people that got tired of McGregor but knowing all of his past antics, it is impressive to see a lot of fans support McGregor.

McGregor also removed and threw away Poirier’s hot sauce which ignited their feud even more. He didn’t want Poirier’s business part of the press conference, luckily for Poirier he still brought in with him extra bottles of sauce.

The fight is projected to be the biggest fight of the year and could potentially even break all time records. It is possible that it could even beat Khabib vs McGregor in terms of records given the storyline that it is a trilogy and McGregor is coming off a knockout loss, we might see an even more motivated McGregor.

Another interesting question was the Mystic Mac prediction, McGregor did not say any exact prediction on when and how will the fight end but he did say he will Poirier in a stretcher. It will be interesting how the fight will play out, a few more nights and we will have our answers.

In the stare down, it was intense. McGregor marched it in fighting position and was ready to fight. No one makes the fight more entertaining than McGregor, he is the best in the business. There is a reason that he owns most of the records in the UFC. At the second, McGregor threw a kick just below Poirier to set up some mind games and Poirier didn’t even flinch.