Deontay Wilder is one of the most feared boxers on the planet. 41 out of 42 of his wins have come by KO. Only Tyson Fury has survived one of his power shots. In short, ‘The Bronze Bomber’ can claim to be one of the three best heavyweights in the world.

He will fight Fury in a rematch next month with his title on the line. The public demand for this fight is massive after the excitement of their last clash. Only time will tell if the 34-year-old can hang onto his strap for a fifth successive year. In an ideal world, the winner would then take on Anthony Joshua in a unification bout.

However, the question was put to Wilder about a potential MMA fight. To sum up his answer, he believes that he would be devastating in MMA gloves. Can you imagine his power in 40z gloves? It wouldn’t be legal. Of course, there’s more to MMA than just punching. Check out his interview below. 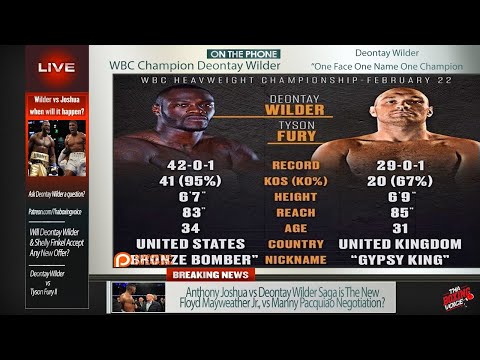 The Bronze Bomber was asked how he thinks a potential move to MMA would go. Of course, he thinks he would wreck the shop. He has all the attributes to be a force in most sports. But we can’t imagine him enjoying a leg kick from Junior Dos Santos or Cain Velasquez. Or any wrestling at all.

“I’ve spoke out about that before, of course, for me I’ll fight you in my sport and I’ll come to your sport and do it too,” Wilder told ThaBoxingVoice. “I feel MMA, they allow you to get on top of your opponent and bash his face in with velocity and speed coming downwards.

“Four-ounce gloves, I already talk about getting people out of the ring, but that would definitely be the sport where I show it, man. It’s just different rules, different things, I’m built with a set of skills, I have a lot of intellect and a lot of knowledge of combat, period.

Wilder believes that boxers are bigger men than MMA fighters because you have to stay on your feet and throw down for 12 rounds. But he also wouldn’t mind stepping into a cage with 4oz gloves on. Is it ever going to happen? The short answer is no. However, it’s fun to imagine it.

“So I see all the MMA guys always come to boxing because in boxing you have to stand on your feet, you have to be a motherf—ng man for 36 minutes,” he continued. “But I wouldn’t mind going into his world as well too. One for one. May the best man win.”

Wilder himself confirmed that it’s not going to happen. He’s not like Tyson Fury who is actively talking about a move to mixed martial arts. But could you imagine him against someone like Francis Ngannou? How about a boxing match between those two men with 4oz gloves?

“You know, all this is fantasy talk,” he said. “I don’t think anything nothing will ever come to fruition, I’m just too dangerous of a man in any type of combat sports.

“I really would end a life because I have the power to, and that’s just the damn truth.”

Is the UFC Trying to Book Anderson Silva vs Nick Diaz...

Atilano Diaz - Apr 12, 2017 0
It appears the rumors have turned out to be false. Former UFC middleweight champion Anderson “The Spider” Silva (34-8, 1NC) will not be rematching...