One of the greatest fighters of all time, George St-Pierre was one of the most accomplished UFC Champions and without a doubt the greatest Welterweight. Not only was he a welterweight champion, but he also won the middleweight champion, making him join the exclusive club of two-division UFC champions. He was also a mega-star especially in his home country of Canada.

George St-Pierre took up Martial Art to protect himself from a school bully, he took up Karate as his first martial art, who knew that it would later mold him to become one of the best fighters ever. Karate was his base martial art but as time goes on, GSP added more to his arsenal like wrestling, BJJ, and boxing. 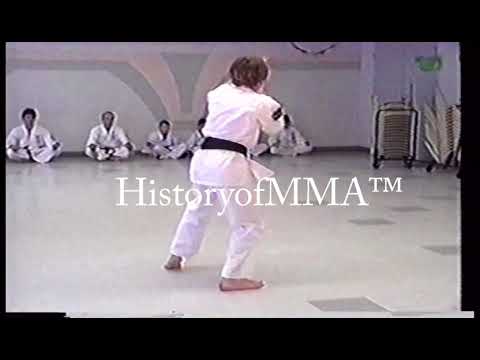 There is no question that UFC saw GSP as a potential star, with his charisma, looks, and fanbase. He entered the UFC in just his 6th Pro MMA fight, and he beat Karo Parisyan via unanimous decision.

He then finished Jay Hieron in the first round, for his second UFC fight. The UFC then booked him for a vacant title fight against Matt Hughes. The last champion prior was BJ Penn but due to going to other promotions, he was stripped off of his title.

It was just GSP’s third MMA fight and he was going against a well accomplished, Matt Hughes who was already a former champion that had 40 MMA fights on his record. The fight gave GSP his first MMA loss, Hughes secured a last-second armbar that submitted GSP in the first round. It was a learning lesson for GSP that made him even an even better fighter.

GSP was ready to climb the rankings once more, he went on to win 5 fights before fighting for the title again beating Dave Strasser, Jason Miller, Frank Trigg, Sean Sherk. Prior to his title shot, he faced former welterweight champion and the guy that dethroned Matt Hughes of the title, BJ Penn. The fight ended in a close decision win for GSP that even he said was a hard fight since Penn clearly had the speed advantage. It had controversies with some thinking Penn won and others also think GSP managed to edge a win.

UFC offered a second title shot for GSP and also his chance to avenge the only loss of his pro MMA career. St-Pierre showed leaps of improvement compared to their first encounter, he landed a head kick in the second round that knocked Hughes out, making GSP the new UNDISPUTED welterweight champion.

After GSP winning the belt, many were saying he was the future of MMA and will likely rule the division for a long time. Matt Serra just won The Ultimate Fighter and is granted an immediate title shot as the reward. Serra was going in a huge underdog and was expected to lose.

The fight ended quickly as Serra managed to clip GSP. He then went to retreat but Serra was chasing him and GSP was not able to recover his balance. Serra landed one of the greatest upsets in UFC history. It was unfortunate since it was GSP who just won the belt and lost it for his first defense.

It was a major setback for GSP and had it been other fighters, they would break from the embarrassing loss but not GSP. He was ready to do whatever it takes to fight for the title again. He faced top contender Josh Koscheck and beat him decisively.

Since Serra was injured, the UFC booked an interim fight for GSP against Matt Hughes. It was a trilogy and GSP coincidentally beat Hughes in the matter that he lost which was via armbar. It just shows that GSP keeps on getting better and his ceiling was still about to be reached.

Becoming an interim champion means only one thing and that he is fighting for the undisputed crown next. GSP was more than ready to avenge his second loss and he did it so easily. Taking Serra down with ease and dominating the fight. He stopped Serra under one round with vicious knees to the body.

After becoming a two-time undisputed champion, he became the hit-list of everyone in the division, it was not an easy task but GSP was ready to defend the belt. During this period, the welterweight division was considered by far as the most talent-stacked division in the UFC.

GSP faced Jon Fitch, an elite wrestler who was on a 16-fight win streak.  Given their fighting background, you would assume that Fitch would be the better grappler but in the fight, it looked like GSP was the better wrestler as he dominated, outstruck and outwrestled Fitch easily. For a champion to dominate someone that was undefeated for a long time easily just showcased that GSP was on a different level in his prime.Since there were controverises in his first encounter against BJ Penn, it made sense to run it back. Unfortunately, this time the fight was one-sided. GSP has grown so much that he seems to be a complete fighter. BJ Penn lost via doctor stoppage.

Although there were moments that GSP got into trouble mid-fight but overall his fights were almost dominant. He went on to beat Thiago Alves, Dan Hardy, Josh Koscheck again, Jake Shields, and all ended via unanimous decision win for GSP.

He then faced the Natural Born Killer, Carlos Condit who just won the interim title since GSP was injured. In the fight, GSP was winning most of the fight until Condit landed a head kick that knocked GSP down.

Many thought it was the end of the long reign of GSP, but proving once more he is the champion, he managed to recover and went on to win via decision. Even Condit was shocked on how did the champion recover. As for GSP’s side, he said that the loss from Serra helped him recover since it was somewhat similar event.

Nick Diaz vs GSP had great publicity since it was the Diaz Brother calling and trashtalking the beloved Canadian Champion. The fight was not close though, as GSP ragdolled Diaz most of the fight.

Probably the most controversial decision in GSP’s fight was when he faced Johnny Hendricks. It was the time that GSP’s face was battered by Hedrick’s heavy hands. Most of the media even scored the fight in favor of Hendricks, Dana White also thought of it as well but two judges gave it to GSP hence a split decision win.

After the win, GSP announced that he would take a break from the sport mainly for health concerns. He has said that the damage accumulated from his body was not to be taken lightly and was ready to vacate it.

The UFC moved on and Johnny Hendricks won the vacant belt. GSP was almost considered retired at that point.

It was not until 4 years later that GSP decided to fight again. Many thought that he would take the belt the was once his but that was not the case. GSP challenged Michael Bisping for the middleweight strap. The UFC granted the fight since GSP is still a household name and never really lost the belt.

Bisping was the much bigger guy and GSP had to deal with ring rust as well. The fight was pretty much even, GSP was winning the early parts while Bisping was getting better as the rounds go on and even bloodied GSP up while on his back.

GSP took advantage of Bisping’s injured eye and set a trap that knocked Bisping down. Once he got Bisping hurt, he took Bisping’s back and secured a rear naked choke that put Bisping to sleep.

It was a night to remember, GSP becoming a two-division champion after 4 years of being out is an amazing feat. Unfortunately, GSP decided to retire after winning belt because he suffered ulcerative colitis.

Many consider GSP as the greatest fighter of all time, why? Because he pretty much achieved everything as a champion. He may have two losses in his resume but he went on to avenge it. He also defended his belt numerous times in a division where many consider as the most difficult to compete at. GSP also never popped for PEDs or Steroids.

Darren - May 9, 2018 0
Oscar de la Hoya is Creating his Own MMA Promotion and Wants to Make Chuck Liddell vs Tito Ortiz III... Dana White is Not...

PICS: Brittney Palmer Brings the Heat to the Beach (NSFW)