Georges St. Pierre is currently on vacation but his management team is actively negotiating with the UFC on his next bout. While nearly everyone has an opinion on what Georges will do next, those close to him appear to know for sure.

GSP himself has sounded non-commital about what might come next for him. Here is what he had to say shortly after defeating Michael Bisping for the UFC middleweight championship:

“I did it for the challenge. There was a time in my career, I was too busy. The challengers were one after the other and I was too small to go up. Now I’m still welterweight size, but I decided to take a shot, because I put on some muscle mass. There’s a point that it’s too much, but now I’m at the point where it’s OK.”

GSP certainly made it sound like he was not going to fight at middleweight again, even though he had committed to defending the title at least once if he won it.

Will GSP Even Ever Fight Again?

There are those who doubt if Georges will ever even fight again. After a 4-year layoff, GSP didn’t sound like he particularly enjoyed the bout much, though his tune might change when he receives his PPV bonus cheque.

His longtime training partner, Patrick Cote, had this to say regarding the Bisping bout possibly being Georges’ last:

“I will not be surprised if he said ‘okay it’s over, I just wanted to feel that feeling again,’” said Cote. “You know why I say that? Because it took him so much time to get out of the cage.

“He was standing in the cage and he was kind of feeling everything, he wanted to grab all the emotion. He was in the cage for almost 20 minutes after the fight, so he was looking away, he looking at everything — it looks like he was grabbing all the energy, and just to say that ‘Alright, that was that. I did it, and I’m not going to miss that anymore.’”

“I don’t know. This was the feeling I had when I was (retiring in New York), but we’ll see. I’m not going to be surprised if he’s done with fighting.”

Former MMA commentator, Brian Stann, believes that GSP deals with some of the worst anxiety he has ever seen. Georges has been diagnosed with obsessive-compuslive disorder (OCD) in the past, which many believe played a role in his sabbatical away from the sport.

“The bright lights, the anxiety, the nerves — GSP, he suffers from some of the worst anxiety I’ve ever seen in this sport,” Stann told reporters. “which makes what he did even more special.” 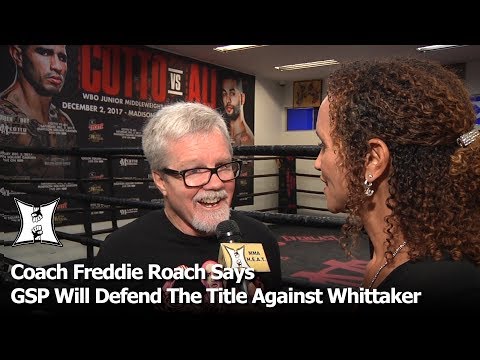 “Georges is on vacation right now, I said, “enjoy yourself, relax, we’ll talk about who’s next when you get back.” – Freddie Roach

Freddie Roach cornered GSP against Michael Bisping and he let reporters know recently he’s quite certain what is next for GSP. While GSP expressed uncertainty that he would defend the belt against Robert Whittaker, Roach is now saying that bout is the only one being considered at the moment.

I talked to Dana and Dana said we have to defend that title at least once so right now that’s what’s on board. In UFC there’s not much competition so you have to do what they say pretty much.

GSP vs. Robert Whittaker is up next and perhaps some normalcy will begin to take shape in UFC’s middleweight division.