Khabib Nurmagamedov is the most dominant fighter in MMA today. Nobody has managed to make him look vulnerable yet. Not even Jon Jones can say that. The Russian will fight Tony Ferguson in New York this April. It’s one of the most exciting matchups of the year.

If he gets past Ferguson, the big question is who is next for the UFC lightweight champion? He would be 29-0 with only Conor McGregor left as a big fight in the promotion. Unless he can drag Georges St. Pierre out of bed, there’s really nobody else left right now.

However, one name that keeps getting linked to fights with both McGregor and Khabib is Floyd Mayweather. Now Khabib has responded to the rumors. He’s willing to box Mayweather if he can have one round with MMA rules. 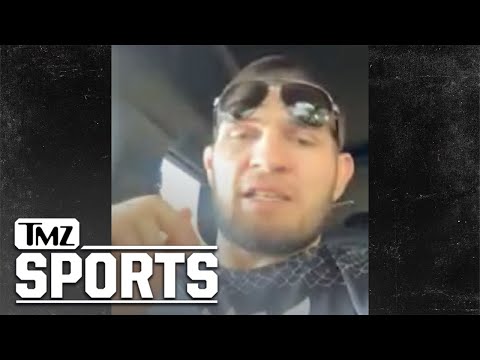 The chances of this fight happening are about as likely as a woman becoming President of the United States. Khabib just isn’t a big enough name to take on ‘Money.’ In an interview with TMZ, he made his feelings very clear. The Eagle thinks that Mayweather is just looking for attention. Furthermore, he believes Mayweather is too old. Khabib said:

”He just wanna be on top media.  “I saw his birthday a couple of days ago, he become 49 or 48, but my father, he’s almost like my father’s age. I no understand how I’m going to punch his face!”

”If you wanna fight, come to the UFC, this is a real fight. I’m not boxer, I’m not just wrestler, I am MMA fighter. If he’s interested, maybe we can make something like – my father talked about this before – like maybe eleven rounds box and one round MMA. Like eleven rounds three-minute box, and the last round, five minutes MMA. If he makes this deal, I can fight.

As for a boxing match, Khabib doesn’t think that Mayweather would be able to knock him out. Then, in the last round, he would want to unleash his wrestling. It’s a beautiful image but one that we’re never going to see in real life. Still, one can dream. Khabib said:

”You know, of course in boxing he’s very good. I agree with you. But I don’t think he can knock me out.”

Khabib is one of the best wrestlers in MMA today. His oppressive style suffocates and brutalizes his opponents. First of all, he takes them down. Then he beats the life out of them until an opportunity for a submission arises or the referee stops the fight.

In sum, a rematch with Conor McGregor is most likely if he beats Ferguson. But El Cucuy is no pushover. A lot of people are sleeping on Ferguson and you can bet he’ll come out hard. We’re so excited about this fight.

Why Teofimo Lopez is a Different Breed of Modern Lightweight