Former heavyweight boxing champion vs. former UFC heavyweight champion on set of a movie. According to Fabricio Werdum he got put on his butt and nearly suffered a broken nose…

Big screen movies and fighting have always gone hand-in-hand. Starting to gain global popularity at a similar point in time, the early 1900’s, boxing and acting have crossed over and become somewhat blurred.

Actors and celebrities have gravitated towards fighters, and pugilists, in turn, have become celebrities through their fighting pursuits. Frank Sinatra would hang out with famous boxers, or Sylvester Stallone for his role in Rocky has become synonymous with boxing.

Former heavyweight boxing champion Mike Tyson is a perfect modern example of fighting crossing over to the world of acting. During his reign as heavyweight champion, ‘Iron Mike’ was one of the scariest knockout artists ever seen.

That reputation has seen Tyson land starring roles in countless movies since his retirement from boxing.

Boxing and MMA are two sports that have been intertwined for years but never more so than now. Conor McGregor and Floyd Mayweather proved that combining both sports will sell tickets.

During filming for a movie starring Mike Tyson and ex-UFC heavyweight champion Fabricio Werdum, ‘Iron Mike’ put ‘Vai Cavalo’ on his butt with one punch. As told by Werdum himself: 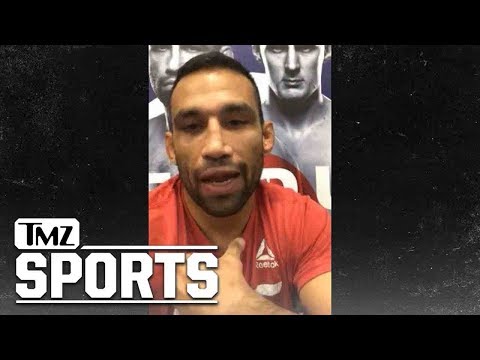 “It’s amazing. Mike Tyson punched my nose, too, an accident, but he punched me and almost he broke my nose. Because I’m an actor, he’s no actor too, but he’s good, he’s a funny guy, he’s a very nice guy, but he punch very hard.”

“It almost knocked down me, but it’s good. I feel good because it’s Mike Tyson, no other guy. Maybe other guy, I don’t feel good if they punch my face, but Mike Tyson’s OK.”

According to Tyson during an interview with NYDailyNews, he likes acting because he gets to play wide varieties of characters:

Mike Tyson: The 1940s and ’50s was really about the mob’s involvement with boxing. Then big business took over the mob’s job. The corporations are the mob now.

DN: Is Mike Tyson a nice guy in real life?

MT: He can be. You have to have a bunch of dimensions. You have to be able to adapt in this world. You can’t be a nice guy living in a world of savages.

DN: You were in trouble a lot as a kid, right?

MT: As an adult, too. Good habits are hard to break.

DN: If you could play any role in any movie, which would it be?

Salvador Sanchez - Sep 27, 2016 0
Money weight fights have been ushered to the forefront of the UFC. It's official, and Conor McGregor's next fight proves it. Whether you agree...