In a Stunning Interview, Nate Diaz Revealed How the UFC Just Wanted Him to Vanish After Losing to Conor McGregor… Instead of Capitalizing on the Stockton Fighter’s Rapid Rise to Fame…

It’s almost three years since he last fought, but now Nate Diaz is finally close to his return. He’s set to take on Anthony Pettis next weekend in Anaheim, California at UFC 241. It’s the co-main event, with Daniel Cormier defending his title against former heavyweight champion Stipe Miocic at the top of the card.

Diaz has always been a straight-shooter and makes his feelings clear when he doesn’t like something. For the past couple of years, he’s been at loggerheads with the UFC, accusing them of trying to make him vanish after he lost his rematch with Conor McGregor.

Now in an astonishing interview with ESPN’s Brett Okamoto, Diaz has revealed his mindset about a potential trilogy fight with McGregor, how he feels about being out so long, and who he would like to fight if he gets past ‘Showtime.’ 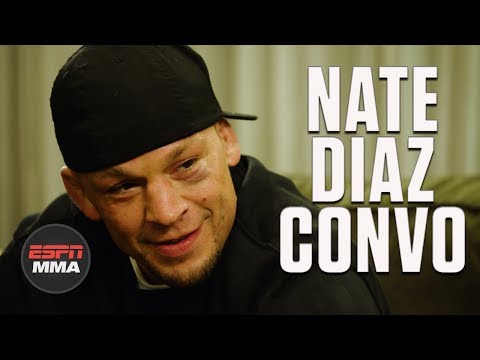 One of Diaz’s main regrets is that he gave McGregor the rematch in the first place. He choked the Notorious out in the second round of their first contest but would lose a decision to the Irishman in the rematch. It was an excellent and very close fight. While it made financial sense to take the rematch, it may not have been good for his longterm career:

“I should have beaten his a** and been on my way, but I have morals and said let’s do it again then,” Diaz told ESPN’s Brett Okamoto. “Some people don’t have that and that’s why they’re not real fighters. I wouldn’t be able to sleep at night; he got smashed in his face and choked in front of everyone.

He got his rematch like a spoiled little baby then came back and won a little decision that could have gone either way. I don’t even care if it’s a big decision, it’s not the same; you can’t be content with a decision, you got choked on your face. Time will tell but I think we will fight again.

Diaz is a master of the controversial. He can make some of Colby Covington’s claims sound like reasonable hypotheses. Check out what he had to say about fighting the likes of Tyron Woodley and Kamaru Usman. Basically, he’s not interested in fighting wrestlers.

“I feel like I’m just better and cooler than those guys. What the hell do I want to fight them for? Pettis is cooler than both of them fight-wise,” Diaz said. “You know what I’m saying? Do you remember Street Fighter, ‘I want to see that guy vs. that guy.’ Or even at school when you knew two guys would kick ass and you were like, ‘I wonder what would happen if them fools fought?’”

“So I think of it from that perspective, too. If I were someone wanted to watch me fight in the UFC, I would want to watch me fight Conor or Pettis. Masvidal just did his thing the other day, and that was great. You know, stuff like that.”

Another thing that Diaz wants to make very clear is that he wasn’t waiting for McGregor to come back and finish off the trilogy. It’s not like the Notorious went on to earn a $100 million against Floyd Mayweather, beat Eddie Alvarez to win the lightweight title and chill with Vladimir Putin during the World Cup. Oh wait…

“I was not waiting for him for a second,” Diaz said. “I outdone the whole game. I’m the top two fighters in whole game right now – three, Jon Jones. Three, you know what I’m saying, and that’s not fighting for three years. I don’t need to fight. I sneeze louder than everyone hears about it. But it’s like, ‘Hold up you guys want me to sit out and vanish?’ that’s what everyone wants.”

Alright Nate. Still, it’s good to have him back.

Khabib REJECTS $15 Million Rematch… Who Should He Fight Next?

Dana White Says Conor McGregor Will Be Out Longer Than First...

Conor McGregor and Kamaru Usman go at it at TWITTER