Since Conor McGregor was booked to fight Floyd Mayweather on August 26, we’ve heard some crazy predictions. Everyone from the combat sports world is talking about this fight, whether positive or negative.

Some feel this bout is great for both sports, but inevitably it’s really all about money. Two men from different trades deciding to lace up boxing gloves for the big payday, and they haven’t tried to hide it.

We’ve heard some corkers over the last month, but pundit Skip Bayless took the cake with his statement about McGregor…

As quoted by MMAMania.com, Bayless clearly has zero knowledge about mixed martial arts:

“Speaking of fighting a bigger man, a guy who outweighed him by … I’m gonna guess 40 pounds and had what, five inches of reach on him and got him on the ground,” Bayless speculated during his conversation with Shannon Sharpe. “It’s called wrestling, sumo-style wrestling, and he pinned him.” 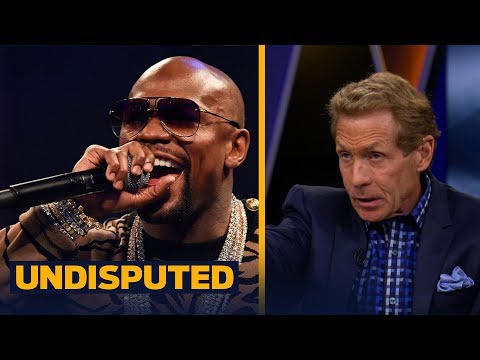 During an interview with ESNews, the two-time opponent of McGregor discussed the Irishman’s boxing skills:

“I think this is a big publicity stunt, but McGregor has a good shot to make something happen in two to three rounds,” Diaz said in a recent interview.

“But I think he has an amateur style where he only has good movement and punches for six to eight minutes, and that’s too amateur for Mayweather. I’m just saying, he’s got a puncher’s chance if anything.”

“But when it comes to his skill and technique he has an amateur style. Anybody can be good for nine, six, seven minutes. They all have that puncher’s chance but this guy (Mayweather) is ready to go round after round, and he’s a hard person to get ahold of.

“As far as MMA, I want to say there’s maybe five guys that do jiu-jitsu that have an actual level of understanding when it comes to boxing,” Diaz told MMA News “He (McGregor) obviously does. I feel like, if he can hit my brother he can definitely put up somewhat of a fight with Floyd, if not actually bring him an actual challenge.”

“I don’t know what’s gonna happen, I could say one thing, I could be wrong. Also, the ups and downs of life, you never know what’s going on. Either one of these guys could have a bad – like the last time my brother fought he had broken ribs, torn rib tissue. Neither one of those fights worked out for him. He had 13 days the first time and the next time he was injured. I was there for it.”

Salvador Sanchez - Mar 17, 2017 0
Joe Rogan with another great moment on his podcast... UFC color commentator Joe Rogan has enjoyed 20 years in his position. During that time, he's...

UFC Trashes Lightweight Champion For Pulling Out Of McGregor Fight

WATCH: The Only Wing Chun Master To Fight In The UFC