Looks like the plot is beginning to thicken, and things are getting heated between former UFC great Quinton “Rampage” Jackson and Nick Diaz. The two were seen in an altercation not long ago in Las Vegas, where Diaz was caught on a viral video clip that saw him trying to make a move on Rampage’s girl.

The incident was posted by Rampage on his official Instagram account with a caption calling Diaz out. A lot of people dismissed it however, chalking it up to a ploy to brew interest in a possible bout. But it seemed a little implausible, given that Rampage is a light heavyweight and Diaz is, at best, a welterweight. Diaz did fight Anderson Silva at middleweight, but he was not nearly as effective as he could have been if it were at a lighter weight.

The beef is getting bigger

Back when Diaz wasn’t even a professional mixed martial artist, he had an encounter with Rampage, a story that he likes to share. This was way back before he even joined the UFC. It was a story about how Rampage once tried to steal his girl, and that at the time, there was no way he could fight back. This time however, things may be different.

“I can’t say anything. I’m looking at this giant Rampage character and I’m like, ‘F–k’ and there’s another team of dudes. I’m like, ‘Bitch, what did you want me to say? What you want me to say to this guy?’ He was joking and he respectfully asked me, ‘Is that your girl?’ and I was like ‘Uh, well, you know, I want her to be!’ 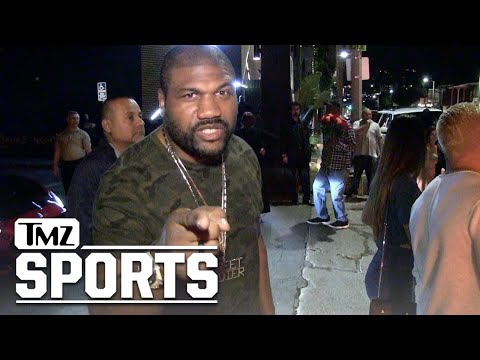 Rampage Jackson has a message for Nick Diaz on TMZ

Now, it seems Rampage is putting the pressure on Diaz and calling him out. Here is a video taken by TMZ with the former UFC champion calling out the Stockton badboy.

Salvador Sanchez - Jun 3, 2017 1
Another boxing legend weighs in on Conor McGregor vs. Floyd Mayweather... During his four-year run in the UFC, Conor McGregor has undoubtedly accomplished very much....

Conor McGregor Looked Huge At The Weigh-In, But Did He Flinch?