Currently training for their big money fight on August 26, Floyd Mayweather and Conor McGregor are putting in work. Earlier this week it was the press conferences, but now the real work in the gym will ramp up.

Having never fought in the pro boxing world, many fans feel that McGregor is fighting an uphill battle. Mayweather, arguably the most technical practitioner in the modern game, is being widely picked for a dominant win.

Since being booked to box ‘Money,’ McGregor’s boxing has been put under the microscope.

After the first one I lost track of it, it was just so annoying. It was the same thing over and over again, they just overdid it. I guess that’s what the fans want to see, it was insane, though. There was just too much trash talking, and there were too many bad words.

I just got tired of it, but I’m looking forward to seeing Floyd get the victory by knockout. Conor is going to get knocked out. Floyd always lives up to the hype, I have no doubt about that, Floyd will get the victory. I actually wanna put some money on it, you know, Conor has like 1% chance of winning. 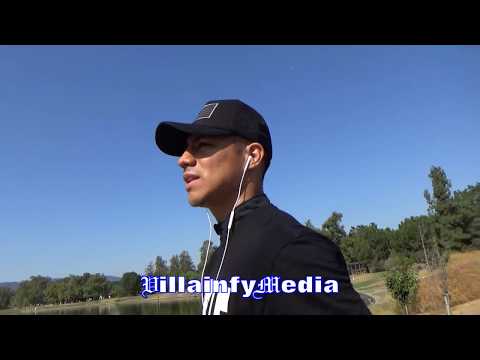 “He’s Already Been Knocked Out in Sparring”

“Floyd has 99-100% chance of winning. It’s only that 1% that Conor could land that bigger punch, maybe half or negative percentage. He got knocked out in sparring already, we were hearing stories. The boxing world is small, you hear these things. I heard they tried Brandon Rios, but he knocked (Conor) out, so they had to push him away.”

Wow, quite the revelation, and totally out of the blue. According to McGregor himself earlier this week, he’s requested former champ Paulie Malignaggi as a sparring partner for Mayweather:

“Yeah, look, Paulie talked a lot of shit. He was talkin’…Look he’s been brought in to spar and then he’ll answer to what he’s been saying and then we’ll go from there after that. But we’re gonna have a knock in the gym.

“I mean, look, we’re gonna have a knock and he’s gonna have to answer to what he’s been saying. Then, maybe, we’ll see after that.”

Malignaggi has been verbally slaying McGregor’s chances in the boxing world lately. Claiming he wanted to make McGregor a ‘better boxer,’ the outspoken Italian-American also said he was going to go after McGregor in a sparring war.

Salvador Sanchez - Sep 5, 2016 0
There are very few UFC stars who've ever been as popular as Conor McGregor. The UFC featherweight champion is constantly in the headlines. Perhaps...

Watch The Gracie Family Fight All Challengers In These Rare Videos

Looks Like David Haye Is Coming To The UFC