Wow…Clearly size is not everything in a fight…

This past week was a highly eventful one for fans of combat sports. Whether you like them or not, it’s hard to deny the star power of Floyd Mayweather and Conor McGregor. Ahead of their August 26 boxing match, the brash duo put on a four-day world tour.

Although riddled with production errors, often corny and WWE-like, the MayMac tour was also wildly entertaining on the most part. Controversial comments from both men, and a boat load of shenanigans had everyone talking.

One of the more popular moments came in Toronto, Canada, as Mayweather’s entourage of bodyguards swarmed Conor McGregor on stage.

McGregor responded to the tense moment with a full on rant against Mayweather’s henchmen. He also threatened to batter them should the same happen again.

“We’re having a good time, but I’ll tell you what, if those f*cking juiceheads [do that again], I’ll slap the hell out of all of them,” McGregor said. “If something like that happens at the next one, something will have to happen.”

Funnily enough, we found a video of the very bodyguard that McGregor later screamed at during the London press conference. Watch Mayweather’s ‘Juice Head Monkey’ get knocked out and his nose broken in 10 seconds: 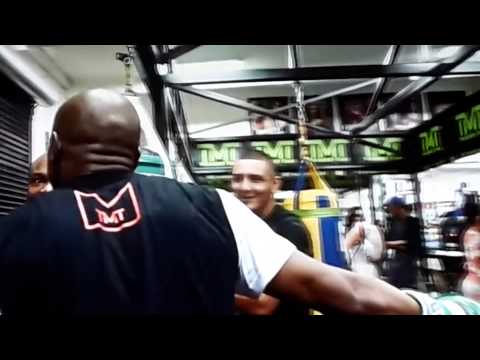 Knocked The F*ck Out

It just goes to show that size and muscles are pretty much useless unless you’re are trying to lift something or look good. It did seem strange that Mayweather was so keen to get one of his bodyguards looking like a softy and share it online, though.

Perhaps McGregor had caught win of this footage before the presser and felt confident he could get to Floyd on stage. Also during the London presser, McGregor comically rubbed Mayweather’s head.

“Juicehead fools,” McGregor said. “I don’t know, man. I didn’t even see them until they were on top of me. I was like, ‘what?’ and then everybody was pushing and shoving. But, handbags, we call that back where I come from. It means it’s nothing, it’s just handbags. It’s just a term we use.”

“What’s with these two juice-heads you got?” McGregor asked. “What the f*ck was that yesterday? He jumped up and he shouted ‘Voltron Power Rangers!’ And these f*cking juiceheads walk up and stand in front of me. Mate, 40 years of age! Get your f*cking sh*t together, my god!.

Salvador Sanchez - Mar 25, 2016 0
Kevin 'Kimbo Slice' Ferguson is one of the world's most notorious street fighters, coming to fame with his Youtube series in the mid 2000's....