Sean O’Malley is one of the most exciting young fighters on the UFC roster today. He basically epitomises everything that Dana White looks for in most of his contemporary signings. Similarly to the likes of Israel Adesanya, ‘Suga Sean’ is very flashy inside and outside the cage, and a good-looking young dude with bagfuls of charisma.

He ran into a roadblock of his own making when he tested positive for the PED Ostarine – which he is blaming on a tainted supplement. It resulted in him being hit with a six-month suspension and his fight against Jose Quinonez on the high-profile UFC 229 card being pulled.

However, he isn’t letting it get him down. As he also recovers from leg surgery, he’s been earning almost $5000 a month through gaming. Focusing on Fortnite and his clothing line is keeping him very busy. 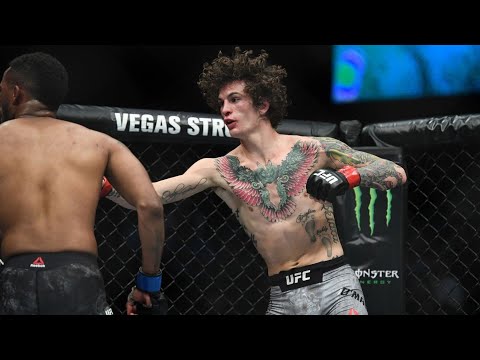 Even though he got pulled for testing positive, ‘Suga Sean’ is staying positive. He explained to the MMA Hour:

“Back-to-back surgeries and in the middle of a suspension for something I didn’t do. I’ve been super positive. I think a big thing right now is I’m super into gaming and I think that’s helped me a lot. I see people are always like, ‘Do you even train?’ and stuff like that, but honestly I haven’t really been able to train the last month because of this hip issue. I just got off crutches last week.

“So I’ve just been playing Fortnite, building my Twitch channel, keeping busy that way. I use my Instagram as a business, so I feel like I’ve been keeping busy in the industry. I’ve been doing a lot of kinda fashion pictures and talking to some fashion, so I’d like to dip my shoes in the fashion industry. I like to be in the entertainment business, so I’m excited to come back, and at the end of the day fighting is what I truly love to do and that’s what I really love doing, so I’m excited to be able to get back in the gym and start training.”

This is the modern world of MMA. These young fighters are connecting with fans in a totally different way to their forebears. The veterans might laugh at the kids, but they might actually have a better business sense. O’Malley has developed a partnership with E-Games group OpTic Gaming.

“Right now I’m making around $4,500 a month through gaming,” O’Malley said. “I just do it because I love it. I’ve been playing video games since I was a little kid, and I’ve had a couple people say, ‘Why don’t you stream? Why don’t you stream?’ I was like, ‘No one wants to watch me play.’ And I’ve been streaming for like nine months now and there are some loyal fans in there.”

To put this in perspective, the lower quintile of UFC fighters will make between 5 and 10,000 dollars per fight. O’Malley is literally making more money than them just by sitting on his backside.

“I’m going to come back, and whoever I end up fighting, I’m going to go out there and do what I do,” O’Malley said. “I think a healthy me is very dangerous, and I think I could beat anyone in the division.”

Hopefully, this blip in his career is simply that.

Eddie Alvarez Responds To Fans Saying He Was Paid To Lose