Conor McGregor is looking like a machine as he blasts the pads. This is the latest footage of McGregor working out for UFC 194, taken on Thursday night, watch the video…

What a crazy year it’s been for the UFC, and it’s all about to come to the boil with the biggest Pay-Per-View event of 2015. December 12 will see UFC 194 finally go down in Las Vegas, Nevada, and the MMA world has it’s focus solely on this mega card.

The long-held rivalry between Jose Aldo and Conor McGregor has provided countless confrontations, scuffles and even a media world tour. Now, with the talking pretty much done, it’s time for the fighting to take place.

The UFC 194 open workouts went down Thursday night (December 10, 2015) and saw the biggest stars including McGregor and Aldo, Luke Rockhold and Chris Weidman, and middleweight contenders Yoel Romero and Ronaldo Jacare Souza working out for fans. 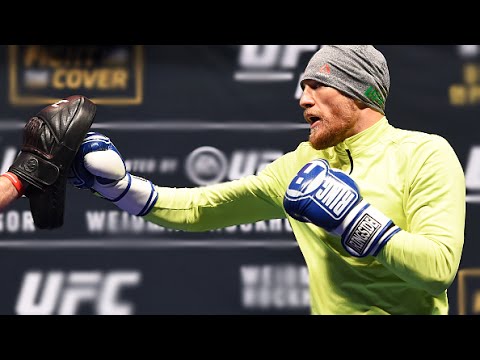 So how did the UFC featherweight champion Jose Aldo look while working out?

Skip to page 2 for the rest of the open workouts, including all the big stars…

Darren - May 14, 2019 0
'Showtime' is Ready to Run Through One of the Few Fighters on the Roster That He Has Sheer Disdain For...  It might not well-documented but...

Conor McGregor Officially Stripped Of Title By The UFC

Nate Diaz: “Jorge Masvidal Was Ready to Give Up”