Fedor Emelianenko’s reputation as the most feared heavyweight over a dominant 10-year period will never be forgotten. Here, we see his prodigy training partner at the age of 19 in action…

Fedor Emelianenko’s influence on the young sport of MMA is massive. During his reign at the top of the heavyweight elite, ‘The Last Emperor’ was, without doubt, a terrifying force and widely recognized at the pound-for-pound best.

During an unparalleled 10-year period, Fedor went 27 fights without defeat. This was during the prime years of Fedor, where he also earned a reputation as a giant killer. For a heavyweight, Fedor was very small.

At just 5 foot 11 inches, Fedor only weighed in at 235 pounds at his heaviest. He was also never really as muscular or cut anywhere near what most heavyweights did to make the 265-pound limit.

Back in 2008, the MMA world was introduced to Fedor’s young training partner and he was a chip off the old block.

As Fedor’s MMA career began to wind down, 19-year-old Kirill Sidelnikov’s was just taking off. Sidelnikov was Fedor’s training partner, considered by many to be the next big thing on the heavyweight MMA scene.

He even came from the same town as Fedor, Stary Oskol, and possessed the same ice-cold demeanor as his legendary mentor.

Here’s Sidelnikov fighting a massive bodybuilder who not only outweighed him by 33 pounds, but also sucker punched him as soon as the bell went:

It wasn’t too long after this fight that Sidelnikov’s career took a few twists and turns. After a loss to UFC veteran Paul Buentello, Sidelnikov Tested positive for stanozolol. It was eventually recognized the positive test was due to a nasal spray Sidelnikov used after breaking his nose.

Unfortunately, the commission didn’t care and Sidelnikov was hit with a five-year ban from the states. He fought a few more times in MMA over in Russia, but in 2010 completely vanished from the sport. 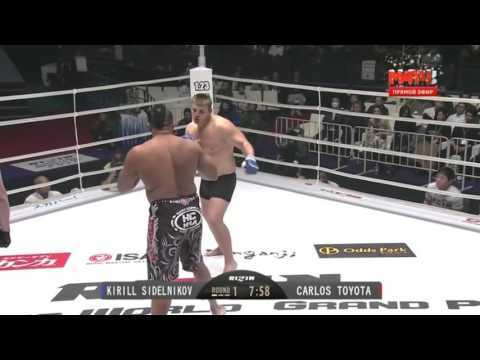 Sidelnikov looked good that night in Japan. He even commented before the fight, to Bloody Elbow, that he hoped the return to fighting in MMA would rekindle his career:

“We got ready for training in September,” Sidelnikov told Rizin FF. “It has been varied and hard training. I think that each of us will be able to defeat their opponents.”

“[Carlos] is a big fighter but it does not scare me. I am ready for a striking battle. I will work on speed and look for flaws in his defense. I have not competed for a long time in MMA but when I got an offer, I could not refuse! This is my chance to get back into the sport.”

After stringing together three more wins, Sidelnikov lost his bid for the Fight Nights Global heavyweight belt in November 2017. Since then, the Russian combat sambo specialist has not competed or been publically linked to a fight.

Darren - May 18, 2019 0
This is Absolutely Disgusting... What Was He Thinking? A Fan Launched a Flying Kick Into the Back of Arnold Schwarzenegger at a Fan Event...

Who Can Actually Defeat Khabib Nurmagamedov?