It’s always an event whenever a bodybuilder challenges a trained mixed martial artist to a fight. The intrigue surrounding guys who fight other guys who are pretty buff but with no fight training, it’s downright interesting.

Recently, UFC bantamweight champion Cody Garbrandt has become the target of a bodybuilder named Matthew Kline Kader. Kader, who has 121 followers on Twitter, vowed to ‘beat up the b*tch Cody Garbrandt’ at the Team Alpha Male Gym.

Bodybuilder vs MMA fighter craze is getting pretty interesting

Things got heated between Garbrandt and Kader in an exchange with TJ Dillashaw. “No Love”, who was scheduled to defend his 135 lb. belt against Dillashaw at UFC 213 got injured and was forced to pull out of the bout. Garbrandt told Dillashaw to wait for him to recover instead of fighting Demetrious Johnson.

Sounds all and good and, of course, a Garbrandt/Dillashaw match would do huge numbers. But that’s when Kader stepped in to mess things up. Under the nickname “Shallow King”, Kader interrupted and called Garbrandt a “b*tch” for pulling out of the Dillashaw fight.

Things got heated fast and now, Kader has promised to fly all the way to Garbrandt’s gym and fight him. The proposed fight is on June 25. Kader even posted a flight confirmation for when he would arrive on Twitter.

These kinds of things can be pretty exciting, even though it has nothing to do with MMA or the UFC. Can Kader really fight? Maybe his muscles are restricting oxygen to his brain and he isn’t thinking clearly. Who knows?

Meet Pedro Sauer and Lance Batchelor, they started it all

But if you want an idea as to how Kader would actually fare in a fight, look no further. The original bodybuilder vs MMA fighter is deep on Youtube and can be seen by anyone who’s interested.

Pedro Sauer is a 2nd degree black belt in Brazilian jiu-jitsu, who trained under the legendary Gracie family. Batchelor is a former Mr. Utah. In comparison, Sauer was only 150 lbs. so Batchelor definitely enjoyed the size advantage.

The only rules to their fight was no biting and no eye-gouging. Classic early UFC parameters. In this video, fans can see just how most bodybuilders would fare against trained fighters. 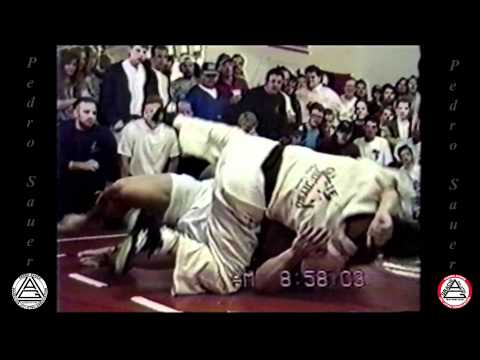 In the beginning it may seem that Batchelor was doing well. But to the knowledgeable eye, Batchelor can be seen often missing the target. And Sauer was definitely in control the entire fight. Brazilian jiu-jitsu practitioners have that uncanny ability to control a situation.

Sauer would go on to inflict a lot of damage and open a lot of wounds on Batchelor. He tapped out shortly to an armlock. However, Batchelor later claims he would have won if the fight wasn’t stopped. Yep, pretty delusional. The bodybuilder also blamed his poor eyesight as a handicap.

It’s a pretty entertaining video and thankfully, in pretty good quality too. Check it out and let us know what you think. This video started this whole bodybuilder vs MMA fighter craze.

Gentleman Jeff - Dec 5, 2017 0
Floyd has finally said what many have been thinking all along... Floyd Mayweather has come out and said what really happened during his bout with...

Overeem posted a statement after TKO loss against Alexander Volkov