Conor McGregor is still technically ‘retired,’ although of course, that means nothing because his name is still in the USADA testing pool. As his coach John Kavanagh said, give him the right offer and he’ll be back by the end of the year. Meanwhile, the volatile Irishman has been trying to find things to entertain him that won’t land him back in prison.

The bottlecap challenge is one of the most popular internet trends out there right now. Max Holloway had a go and pulled it off in style. Belal Muhammad’s effort was less successful but hilarious. Now ‘The Notorious’ has taken a swing at the bottle.

He even took the time to call out Floyd Mayweather to have a go. Check out the clip below.

Excellent job Jason Statham, I tip my cap to you.
I’ll take it from here.
I nominate Floyd Mayweather. @properwhiskey pic.twitter.com/9IrFUXyehx

Of course, McGregor held a bottle of his own whiskey while executing a 360 spinning roundhouse kick. To be fair to the Irishman he demonstrates perfect timing and technique to knock the cap off of the bottle. He’s also trimmed the beard as you can also see. In the video he thanked Jason Statham – whose own successful effort you can see below – and then called out Floyd Mayweather:

“Excellent job Jason Statham, I tip my cap to you. I’ll take it from here. I nominate Floyd Mayweather.”

Statham’s own attempt is very good as you can see. The action movie star surely has a lot of training though so it’s not that surprising that he can pull off some epic moves. One of the most random efforts was from John Mayer. The singer-songwriter was called out by Max Holloway and he too delivered in style as you can see below.

We’ve no idea how many bottles or hands have been broken in the making of these videos but we can imagine a lot. It seems a little bit unlikely that they all get it right on the first go. 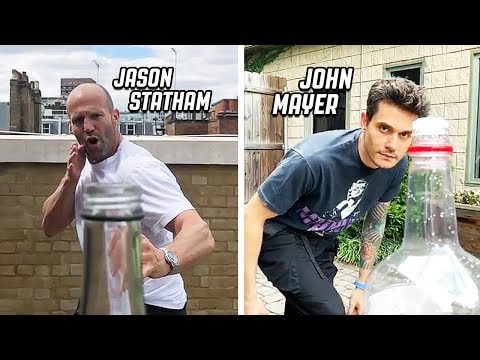 Speaking of Conor McGregor, UFC President Dana White discussed how MMA fighters are wasting their time trying to emulate Conor McGregor. We don’t want to mention names – and we’re definitely not talking about Dillon Danis, James Gallagher and Colby Covington – but many fans get annoyed by their fake attempts to do what McGregor did to get to the top.

“It happens. When you see a guy who’s as successful as he is and he’s fun, I mean you see the guy’s fun and everything else, and you start thinking ‘well maybe if I act like this, I’ll have what he has. There’s only one Conor McGregor.

ross - May 5, 2019 0
The first priority of an MMA referee is to look out for the health and safety of the two fighters they are locked in...

WATCH: Jesus Christ Goes Viral By Slapping The Soul Out of...

The Staggering Money Floyd Mayweather & Conor McGregor Will Make Per...

When Fighters Lose Control: Which Bully Beatdown Went Too Far?