Conor and Floyd debated over glove size, but an entirely other option existed as well…

Chances are the Hausa people of West Africa were not too concerned over whether Conor and Floyd wore 10-ounce or 8-ounce gloves. In fact, they probably couldn’t understand why those gloves weren’t covered in shattered glass.

The sport of Dambe in the region has followed many of the same trends that boxing has. Much like the rules of boxing once allowed, Dambe once involved the use of grappling and takedowns. Eventually, these aspects of the bouts were done away with, and Dambe grew into an entirely striking-based form of combat, much as boxing did.

Nowadays Dambe fighters travel throughout the region putting on shows for spectators who frequently gamble on the outcomes. Unfortunately for the athletes, however, fights can often have lethal endings.

History and Rules of Dambe

The sport was started by traveling butchers from the Hausa society. These tended to be the lower caste of their society. As the butchers traveled from village to village to kill animals and handle their meat, they would also put on tournaments for the towns folk. Often such tournaments would occur around the harvest time when farming communities were awash with excess money for gambling.

As the sport grew it was no longer just the butchers who took part. Nowadays males start training at a young age with others from their region until they are ready to compete in the tournaments.

The rules are similar to, but also entirely unique from, the more commonly known form of boxing. There are 3 rounds per fight, however, no clear cut rules exist on how long rounds are. A round can end when there is limited activity amongst the fighters, a fighter or ref calls a halt to the round or a fighter is dropped. Once a fighter’s knee, hand or body touches the ground the fight is over.

Fighters don’t generally strike with their lead hand, which is left unwrapped. It can be used to keep distance and also to clutch onto an opponent. A fighter’s “Spear” is their strong-sided handed which was often dipped in sticky resin with broken glass, though this is considered illegal under modern rules.

A fighter’s lead leg is usually covered in a chain-like material, though the back leg is left unwrapped. Either leg can be used for kicking, which has become more commonplace in recent years.

The video below is of Dambe warriors fighting on the battlefield. The commentators also do an excellent job of explaining some of the more basic tenants of the sport. 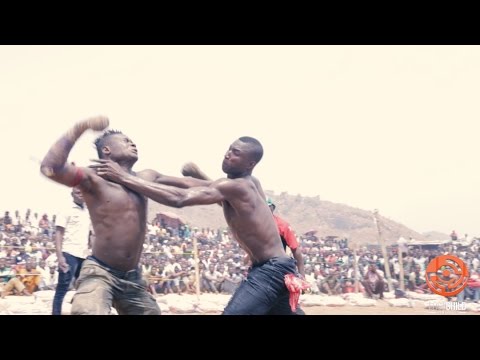 Dambe events are often accompanied by drumming and a festive-like atmosphere. Check out this video of a Dambe competition at the Argungu fishing festival in Sokoto, Nigeria.

Sometimes fighters have been known to indulge in marijuana as a pre-fight ritual. The Nevada State Athletic Commission could not be reached for comment regarding the matter.

Salvador Sanchez - Dec 28, 2015 0
When size and brute strength meets speed and technique... Great disparities in size, weight and skill are always entertaining when talking about fights, and often...

If Leon Edwards beat Diaz, does he deserve a title shot?