This is the video that you didn’t know you needed in your life. Daniel Cormier donut wrestling a San Jose police officer in the AKA gym. It’s hilarious and shows what a great sense of humor the UFC’s ‘champ-champ’ has.

Since taking the heavyweight title from Stipe Miocic, by violent knockout, the Louisiana native’s stock has never been higher. For so much of his career, DC was never able to get the love from fans that he deserved. A combination of recent success in the octagon and his infectious personality while commentating fights have brought them around.

In the video below you can see DC step up to a new challenge. A San Jose police officer comes into Cormier’s territory with a box of donuts, ready to wrestle. Khabib Nurmagamedov trains there too. He wants to do the same with tiramisu.

As you can see from the footage above, the police officer strides in with his belts over his arms. He’s not intimidated by the ‘baddest man on the planet,’ as they stand in the center of the octagon. The two men frantically try to wrestle the box of donuts as Cormier backs up against the cage.

The lid of the box falls open and the two men begin to gorge upon the delicious baked goods that lie within. Sadly for DC, his donut-eating technique lacks the pace and practice of San Jose’s finest and there can only be one winner.

The officer is lifted onto the shoulders of his fellow cops and he retains his dubious title of being the best donut eater in the city. It’s actually a very funny video, and the Imagine Dragons soundtrack just adds to it. 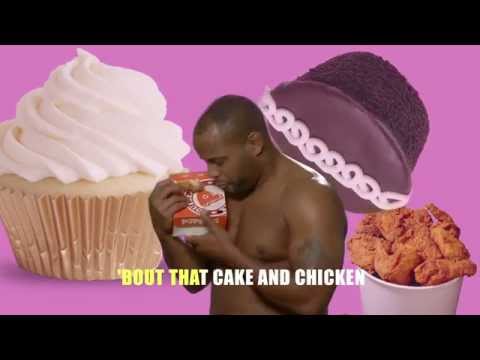 This isn’t the first time that Cormier has been involved in a funny video revolving around his love of food. He’ll be the first to admit that he’s got a dad bod. We love him for it. If you haven’t seen the video above, ‘All About That Cake,’ prepare to laugh or be scarred by his shirtless, sensuous dancing while eating.

Fellow heavyweight – it still feels weird calling DC a heavyweight – Derrick Lewis jokingly said that he wanted to fight Cormier for insulting Popeye’s Louisiana Chicken. Maybe instead of fighting, they should just have a food challenge contest instead. It would surely be more entertaining than his last fight.

Cormier’s next official challenge will be to take on Brock Lesnar early next year, with February being tentatively considered by the UFC. Lesnar, a former UFC heavyweight champion in his own right, is currently serving a suspension by USADA, after testing positive for PEDs in his last return against Mark Hunt.

Jeez, what gave it away? Even Lesnar’s eyeballs have biceps. The UFC do not want a repeat of the mess that came about after the Lesnar v Hunt fight, which was overturned to a no-contest and resulted in the Super Samoan suing the promotion.

It stands to be the biggest payday of DC’s career. He’s expected to retire soon after. Daniel Cormier is the type of fighter we will miss most when he is gone. That’s guaranteed. Enjoy it while it lasts.

Salvador Sanchez - Sep 10, 2017 0
'The Notorious' one seems to have landed himself in a spot of bother according to this report... During an insane 12 months for combat sports,...

Kamaru Usman deserves to be #1 P4P not Jones