A Russian Boxing Champion Has Made Headlines After Attacking a Military Engineer… He’s Since Been Arrested and Charged for the Assault… But in a Sensational Twist, it’s Been Alleged that the Police Helped him to Set Up Attacks in the Past…

You probably haven’t heard the name Daniil Gritsay before, but he’s become a notorious figure in his native Russia, for launching a series of brutal assaults against random people. The latest was on a military engineer named Igor Nesmelov from Moscow.

Gritsay is a professional boxer, and a regional champion in the Rostov region, about 200km from Moscow, in the west of Russia. However, it doesn’t look like he’ll be fighting for any more titles soon after he was sentenced to six years in prison for his part in a brutal assault on Nesmelov.

Watch the footage below of the violent and cowardly attack that saw the military engineer hospitalized. 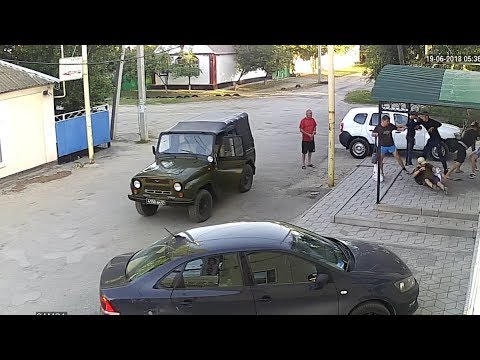 The video is pretty harrowing. Nesmelov is set upon by the boxing champion who lures him outside and then proceeds to unleash a savage beatdown. He’s assisted by his friend, identified in Russian media by his surname ‘Sileev.’ The pair throw punches at the stricken engineer and kick him on the ground.

He was hospitalized, and doctors feared that he would fall into a coma because his injuries were so serious. However, fortunately, Nesmelov looks set to recover from the vicious assault. Not only was he punched, but he also took shots to the head with a stone. He was left with several fractures in his skull and concussion.

When the police arrived on the scene, it was reported by Rostov media that they just smoked with Gritsay and didn’t arrest him. It’s believed that the Millerovo police have worked with Gritsay before and helped him to get away with assaults in the past.

Gritsay is alleged to have attacked them after the engineer and his business group asked them to stop making noise outside of the window of the accommodation where they were staying. It’s believed that Gritsay went back after the assault to threaten the other men with more violence if they reported the incident to the police.

However, after footage went viral the police were forced into action and it became a federal case. Members of the Millerovo police have been arrested for their roles in helping Gritsay in the past and for corruption. Bizarrely the footage emerged from a video that was taken by one of Gritsay’s friends. Don’t video your buddy committing assault if you want him to stay out of prison.

It’s very rare that professional fighters actually get into street fights unless they’re forced to protect themselves. Most of them are aware of the consequences if they were to hurt somebody, and have enough self-control to avoid that situation. The Diaz brothers have been involved in a few incidents in the past, with Nick famously putting a beating on a guy who thought it was smart to attack him outside a night club. Why would you attack a professional fighter?

John - Mar 15, 2021 0
MASSIVE News! Without a doubt the biggest fight to make this year and probably next year. We will potentially see a new undisputed heavyweight...

Darren Till: Bio, Net Worth and Career Highlights

Love and technology: how dating services started and where they are...