This fight should have been booked five or six years ago. We’re lucky so that it still turned out to be an insane war. Fedor Emelianenko, the former PRIDE champion and widely regarded as one of the best fighters never to fight in the UFC, vs former UFC heavyweight champion Frank Mir at Bellator 198.

It had the making of a great fight, but many fans were skeptical. Mir was a heavy favorite going into this one. The years have visibly taken their toll on Fedor’s chin, and with sadness in our hearts most people expected him to get smashed up again in this one.

Taking place in Chicago’s Allstate Arena, this was set to be the second biggest card in the history of Bellator MMA. Fedor clearly hadn’t read the same script as the rest of us either, because he won the brutal fight in stunning style.

Despite both men being past their best, there is still enough glamour attached to their names for it to be entertaining. They’re both pioneers of old-school MMA and they came out of the blocks blasting punches at each other.

Mir had the best of the early part of the fight. Of course, the entire match only lasted 48 seconds, so that doesn’t say much really. He swarmed Fedor, catching him with a heavy hand and dropping him to the floor. However, the Russian was able to recover and get back on his feet.

Mir was overextending at this point and Emelianenko made him regret it. Fedor caught him with a stiff uppercut, then finished it with ground and pound before referee Mike Beltran intervened. On a night of high-level submissions, it was exactly what the fans wanted to see from these two legends of MMA.

The fight took place as part of Bellator’s Heavyweight Grand Prix. It’s a very weird format because the whole thing is so drawn out. Instead of putting a load of heavyweight fights on in one night and doing the same thing a few months later, they’ve spread it thin, so that it just doesn’t capture the imagination. Poor marketing by Bellator.

However, Fedor won’t be complaining. ‘The Last Emperor’ moves on to fight in the next round against Chael Sonnen, and you’d really fancy him to make a run at the belt now. This was a very good win for the Russian and brought a smile to the face of many fans. 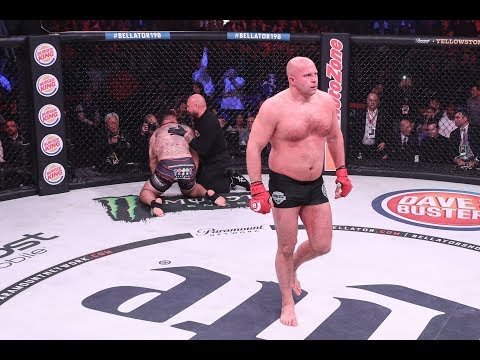 Conor McGregor wannabe/training partner Dillon Danis made his debut last night as well. He took some heavy punches before getting the takedown and submitting Kyle Walker in the first round. Now he wants Ben Askren. Good luck mate. The full results from a busy night at Bellator can be seen below:

Salvador Sanchez - Apr 20, 2016 0
This is madness.... The UFC took a massive hit yesterday, as their featherweight champion and pay-per-view champion Conor McGregor announced his retirement. The mixed martial...