Is this the first time we’ve seen this submission landed in active MMA competition? Honestly can’t remember anyone else locking up one of these and getting the tap…

RFA (Resurrection Fighting Alliance) 35 went down this weekend in Utah this past Friday February 19, with the main event that featured the lightweight title on the line. Competing for the promotion’s 135-pound strap were David Castillo and Thiago Moises.

Moises possessed a 6-1 record heading in to the main event title fight, and his opponent Castillo was much more experienced at 19-7. Moises is a Brazilian Jiu Jitsu ace, Castillo also has chops in grappling, but also likes to use knockout striking.

So here’s what happened when the two faced off: 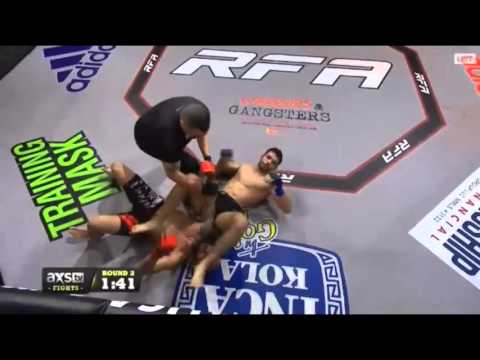 Wow, very nice. That was a helicopter armbar, which is one of the coolest but also rare transitions you’ll see in a mixed martial arts cage. So what else has been happening this weekend in MMA?

Here’s Sapo Santos landing another big finish by kicks, this time against Rafael Silva at ONE Championship 39: Tribe of Warriors:

Mean! Another super rare submission came at us via WSOF (World Series of Fighting) 28 in the form of UFC veteran Jamie Yager. He’d been out of action for three years before this bout, returning to face Daniel McWilliams with this crazy stoppage:

In case you didn’t know, that was a neck tie armbar finish. Here are some more highlights from WSOF 28, courtesy of Zombie Prophet on Twitter:

Darren - Jul 22, 2019 0
Jon Jones Has Released a Statement After News Broke That he Has Been Charged With the Assault of a Strip Club Waitress...  Jon Jones just...

The Internet SAVAGES Luke Rockhold For Getting Knocked Out at UFC...