The king of trash talk is back, Conor McGregor will face UFC lightweight champion Rafael dos Anjos at UFC 196, and in honor of that event here’s his greatest Thug Life moments…

The UFC featherweight champion Conor McGregor didn’t just get to where he’s at today with his stunning mixed martial arts skills. The number three ranked pound-for-pound UFC star also uses his charisma and banter to get noticed.

Throughout his UFC tenure, Conor McGregor has trash talked and then knocked out some great fighters. His year long feud with Jose Aldo ended in just 13 seconds at UFC 194, as ‘The Notorious’ blasted the former champion with a one punch knockout. 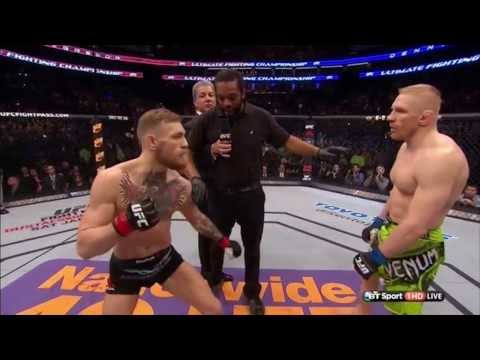 Ahead of his UFC Fight Night 59 scrap with Dennis Siver, Conor McGregor made sure everybody heard what he had to say. He called Siver a ‘midget German steroid head,’ and come fight night he was amped to put on a show.

The classic ‘Tug Life’ in the video above was by E.O.W on Youtube.

This ‘Unexpected Thug Life’ is simply hilarious. It shows one of numerous predictions McGregor has made throughout his career, this time of his UFC 194 fight with Jose Aldo. The Dr. Dre touch is just classic.

Two Men Who Stand to Ruin the Biggest Heavyweight Bout in...

Did These Fighters Go Too Far When Accepting The Muay Thai...

Chan Sung Jung vs Dan Ige: Look into it